In contrast to the one-sided resolution by the British Trades Union Congress supporting an ill-defined boycott of Israeli products from “illegal settlements” in cooperation with the anti-Zionist Palestine Solidarity Campaign, the new leader of America’s labor federation has vowed to maintain trade union support for Israel.

[G]iven the traditions, the heritage, the commitment, and given the values Jewish workers have always brought to the labor movement, I don’t think it ought to come as any surprise that the Jewish community here – and around the world – has never had a stronger ally than the AFL-CIO. And tonight, let me tell you that, so long as I’m president, you will never have a stronger ally than the AFL-CIO. That’s why we’re proud to stand with the JLC to oppose boycotting Israel.

Brothers and sisters, there is only one way we’re going to stop the violence in the Middle East, and it’s not by bashing Israel; it’s by supporting President Obama’s peace initiative.

Trumka, a former Pennsylvania coal miner and president of the mineworkers’ union, recalled a JLC-sponsored event 72 years ago at which a previous miners’ leader spoke. 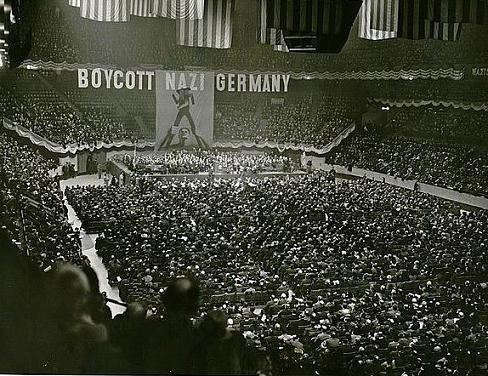 Twenty thousand people packed Madison Square Garden in the largest anti-Nazi rally up to that time.

There were several speakers – Fiorello LaGuardia and others. But the one who stirred the crowd the most was John L. Lewis. He gave a detailed account of what had happened to German labor movement. He talked about the trade unionists who’d been tortured and murdered. He described Hitler’s Germany as having become a medieval country where workers had been reduced to serfdom. And of course he talked about what was happening to the Jews. But that’s not all he said.

He said that there was only one guarantee that America would never fall victim to fascism itself – and that one guarantee was a strong, growing, labor movement. A labor movement that didn’t only focus only on winning at the bargaining table, but also creating what he called industrial democracy. He said: “I need hardly point out to you the union isn’t only an instrument for improving workers’ wages, hours and conditions of labor – it is also an instrument for the expression of their social, political and economic aims.”

It shouldn’t be forgotten that while American labor leaders like Lewis were denouncing Nazi Germany’s persecution of Jews and trade unionists and calling for a boycott, US companies like Ford, General Motors and IBM were happily doing business with the Nazis up until the US entered the war at the end of 1941– and, indirectly, even afterward.

In 1937, the same year as the Madison Square Garden rally, IBM president Thomas Watson, as head of the International Chamber of Commerce, accepted the Eagle with Star from Nazi economics minister Hjalmar Schacht.

Henry Ford– honored by Glenn Beck for his opposition to Franklin Roosevelt’s New Deal– received the Grand Cross of the German Eagle from the Nazis in 1938. 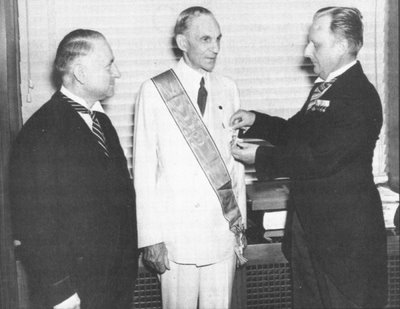