We’ve posted before about the antisemitc, Holocaust-ridiculing French comedian Dieudonné— once (and I hope no longer) a darling of the French Left– who has been booked for an appearance next March at London’s Leicester Square Theatre in his newest stage show “Sandrine.”

According to the gingerly-worded announcement on the theatre’s website:

The issues touched on, while sensitive, are more social than political on this occasion. The world DIEUDONNÉ portrays here represents a return to his earlier apolitical comedic roots.

Ah. Speaking of apolitical, Dieudonné is now palling around with the “relatively apolitical liberal” himself, Holocaust denier Robert Faurisson. (This follows his selection of French fascist leader Jean-Marie Le Pen to be the godfather of his baby daughter.)

On 26 December 2008 at an event in Parc de la Villette Paris, Dieudonné gave the Holocaust denier Robert Faurisson, a “prize for maladaption and impertinence”. The award was presented by one of Dieudonné’s assistants, Jacky, dressed in a concentration camp uniform with a yellow badge. [If you can stomach it, you can watch the hilarity, with English subtitles, here. It comes from a “revisionist” website; Dieudonné has become quite a favorite of theirs.] This caused a scandal and earned him his sixth court conviction to date. On 29 January 2009 he celebrated the 80th birthday of Faurisson in his theater, in the midst of a representative gathering of Holocaust deniers, right-wing radicals, and radical Shiites. Dieudonné and Faurisson further appeared together in a video making fun of the Holocaust and its commemoration.

You can watch the video here. Perhaps those whose French is better than mine can explain what’s going on. 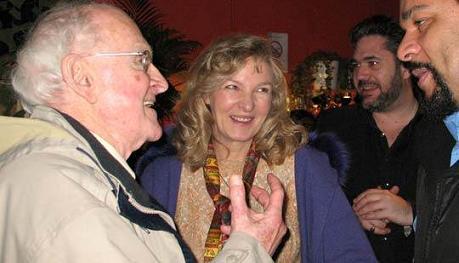 So now what? Should the UK government bar Dieudonné from entering the country? On the one hand, I’m not comfortable with keeping people out simply for expressing their views, no matter how disgusting. On the other hand, if Michael Savage and Fred Phelps were banned from Britain for voicing their wretched opinions, it would be the height of hypocrisy to admit Dieudonné.

And what if he is permitted to perform in London? Will the Socialist Workers Pary-connected United Against Fascism organize a protest? Judging from past performance, I think we can guess the answer to that.