This is a cross post from Edmund Standing’s blog

A notorious video clip featuring Nick Griffin speaking at a meeting of American ‘white nationalists’ in 2000 was discussed on Question Time. Here it is:

Griffin claimed that in this speech he was trying to win over ‘youngsters’ that former KKK leader David Duke (with whom he shared a platform) was trying to ‘lead astray’.

Is that a logical interpretation of what he said in the clip above?

Of course not, as Duke himself has now written:

When he said he met with me to save kids from being “led astray by David Duke,” that comment was transparently dishonest to every viewer. Not only did the comment not help him, it hurt him and made him seem disingenuous, as did a number of other things he said during the show.

Worry not, though, Duke isn’t too upset:

I don’t hate Nick for his disparaging remarks against me, but for the sake of the Movement and the ideas I think we ultimately share, he must fundamentally change the approach he uses with the media.

One aspect of Griffin’s current approach, of course, is to lie, as he so obviously did when trying to ‘explain’ why he spoke alongside Duke. Griffin claimed he was no fan of Duke and was trying to encourage young racists to follow his lead by becoming more (superficially) ‘moderate’ (using ‘saleable’ words like ‘freedom’ and ‘democracy’ instead of banging on about Jews, for example).

That was in 2000. Five years later Griffin again shared a platform with Duke (as did Simon Darby, Deputy Leader of the BNP), who he supposedly so opposes, at Duke’s ‘European American Unity and Rights Organization’ (EURO) conference. 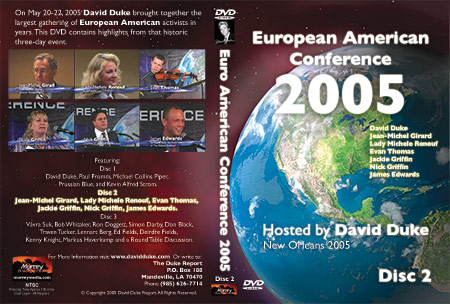 Others speakers at the conference included:

No doubt Griffin was deeply concerned that ‘youngsters’ at the conference might be ‘led astray’ and his only reason for being there was to save them from the racist and anti-Semitic scumbags speaking there (despite him actually being one of them).

If you believe that you’ll believe anything.

Just for once David Duke is right: Griffin was being ‘transparently dishonest’ when he publicly disowned Duke in an attempt to save his own skin. No doubt Duke is also right to speak of ‘the ideas I think [he and Griffin] ultimately share’. And I think we all know what they are.