Biased BBC attempts to find some hypocrisy in the debate about the BNP using UK military iconography:

Well, I’m sure you can’t expect the (former) Army top brass to keep copies of everyone’s election leaflets – but surely the BBC’s army of newshounds and political correspondents must have noticed that the 2009 Euro elections featured an awful lot of what you could loosely call ‘nationalist’ iconography which didn’t come from the party not named by the generals. Try this, spotted by Iain Dale.

OK, why haven’t the BBC spotted this leaflet, handed out in the West Midlands Euro constituency in 2009 – by an ‘essentially racist’ party ?

Of course, Labour are not alone in using the military: 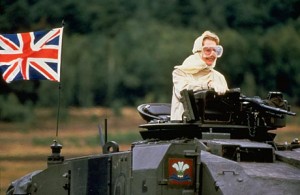 But Biased BBC is rather missing the point, and getting a cheap party political shot at Labour in a campaign which should be focused on the BNP. The letter that started the Stolen Valour campaign, run by Nothing British about the BNP [bit of a clue there], is concerned with rescuing the good name of the army from political extremists – not democratic politicians. If the Tories, Liberals, Labour and other democratic parties want to be associated with the military, then fine. It’s not the same as a bunch of National Socialists attempting to attach themselves to the military. After all the British army is in the business of protecting and promoting liberal democracy, and the campaign is clearly about the BNP and has been since the beginning.

The Armed Forces are in danger of being hijacked by far-right extremists “for their own dubious ends”, a group of former generals warn today.
[…]
“We call on all those who seek to hijack the good name of Britain’s military for their own advantage to cease and desist,” they write. “The values of these extremists — many of whom are essentially racist — are fundamentally at odds with the values of the modern British military, such as tolerance and fairness.”
[…]
The letter is part of a campaign launched today that attempts to highlight the BNP’s strategy of cloaking itself in the military.
[…]
General Jackson told The Times: “The BNP is claiming that it has a better relationship with the Armed Forces than other political parties. How dare they use the image of the Army, in particular, to promote their policies. These people are beyond the pale.”

Of course, Laban at Biased BBC may consider the Labour Party to be politically extremist or even more bizarrely essentially racist, but if you have got to the stage where you are suggesting democratic parties in the UK are morally equivalent to fascists then you are part of the problem. 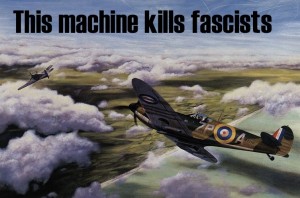