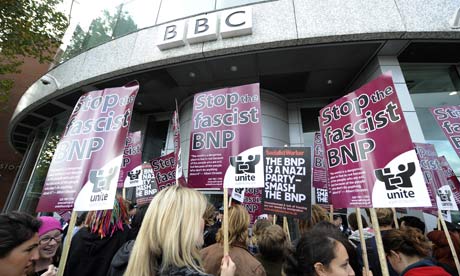 You really have to stop and wonder sometimes whether SWP and UAF activists are just hysterical children throwing tantrums for attention or temper. Is there not a serious strategist among them?

Having not succeeded in the, frankly, redundant-in-the-internet-age tactic of ‘no platform’, what did they do next? They created such a media stir – now, apparently having broken in to the TV studio – that Nick Griffin’s performance on Question Time will probably be guaranteed the biggest audience since a mysterious assailant shot J.R. Ewing!

What might have passed as another boring night of political talking heads – of interest only to political anoraks like ourselves – has become the televisual event of the year.

They’re worried that no-one has the rhetorical calibre to take on Griffin or to defeat his arguments, and thus millions of British citizens will be bamboozled by his racist double-talk… so they, um, connive to give him the biggest audience possible.  Gah!

So, as predicted, the Socialist Workers Party has opted for that old favourite: rioting and fighting in the streets.

So that’s the British National Party’s Party Election Broadcast footage sorted. Nick Griffin is thanking you for your help.

I am told that the SWP’s Martin Smith has managed to get himself arrested.

Smith is no antifascist.

Here he is raising money for the SWP at a concert with the outspoken antisemite, Gilad Atzmon.

Some footage of today’s events:

Keep an eye out at the 48 second mark for this chap – who evidently hasn’t heard that the BNP is one of the leading anti-war parties. 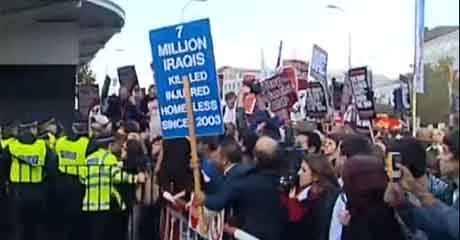