What can I say but congratulations to the centre Right antifascists of Nothing British About the BNP, who have launched a fantastic campaign against the fake “patriots” of the British National Party which hits them where it hurts.

Here’s the report in the Daily Mail:

The BNP is hijacking patriotic British symbols and attaching itself to the Armed Forces for its own ‘dubious ends’, a group of former generals has warned.

A letter signed by General Sir Richard Dannatt and General Sir Mike Jackson, both former heads of the Army, said the party was tarnishing the forces’ reputation by associating itself with soldiers’ sacrifices.

The letter highlights fears in the top echelons of the military that the BNP is exploiting servicemen.

It says: ‘We call on all those who seek to hijack the good name of Britain’s military for their own advantage to cease and desist.
‘The values of these extremists – many of whom are essentially racist – are fundamentally at odds with the values of the modern British military, such as tolerance and fairness.’

The BNP has regularly used pictures of soldiers as part of its campaign, alongside quintessentially British images such as Winston Churchill’s V for victory sign.

Its campaign for the European elections was called the ‘Battle for Britain’, and featured a Spitfire logo.

The generals point out that the Armed Forces are multicultural, with one in ten servicemen coming from the Commonwealth.

Here is The Sun:

A WAR to stop the BNP draping itself in the Union Flag and hijacking Britain’s proud military history for propaganda is launched today – backed by livid Forces chiefs.

The wartime Prime Minister – scourge of the Nazis – has been used on BNP posters and leaflets to symbolise Britain’s bulldog spirit, along with imagery from the Battle of Britain.

The Sun rams home its point with a pretty blunt cartoon: 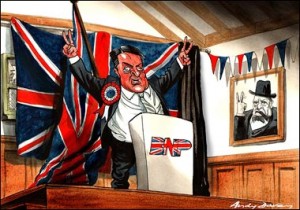 The story is reported in the Guardian, the BBC, and the Mirror. It has been carried by all the major television and radio networks.

The BNP has been hit for six. The Mail records their weak and bewildered response:

But the BNP hit back and condemned military top brass for speaking out about this but keeping quiet about the scandal over MPs’ expenses.

‘It is rather strange that they said nothing when MPs were embezzling millions of pounds on furnishing their homes whilst our boys were being blown to smithereens because of a lack of funding for equipment,’ a spokesman said.

Nothing British calls their campaign:

I don’t think so. Nothing British are right to point out that the ridiculous little Spodes of the BNP are the direct ideological descendants of the Nazi Party, who would have been interned along with Mosley and the other traitors to Britain during World War II. Their appropriation of the symbolism of Britain’s proud wartime record is stomach turning.

At least John Tyndall had the virtue of honesty: 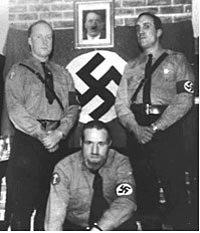 “It wasn’t until I got into boy service ’til I realised what it was all about. There was a system of values that was constantly instilled in their soldiers. Selfless committment. Courage. Discipline. Integraty. Loyalty. Respect for others. These are things that may seem as ‘old fashioned values’ but they are the very things that gets a young soldier to get up, run through fire and pick up his friend who is injured.”

McNab said that Nick Griffin’s exploitation of something that he “values a lot” made him very angry. The former SAS troop sergeant said points out how the freedoms we enjoy today can also be attributed to the thousands of Commonwealth troops who helped defend us during the Second World War.

The BNP’s “Battle of Britain” European election campaign drew heavily on the use of war time imagery, but the Bravo Two Zero hero draws attention to an obvious omission throughout the BNP’s revisionist history, namely the Polish and Commonwealth Air Crews who came to our rescue during our darkest hour of need. “That is why we won the Battle of Britain and as a country that is why we are so good because we have got such a good mix. And Nick Griffin doesn’t get that.”

There are some clueless “antifascist” groups – attached to extreme Left political groups – which believe that rioting in the streets is the best way to fight the thugs and hooligans of the BNP.

Nothing British show how professionals take on the Nazis.