Will women go out with you if you post as Keir Starmer QC, the Director of Public Prosecutions?

During a six-week campaign of deception Paul Bint, 47, repeatedly wined and dined unsuspecting victims he met through lonely heart ads, while allegedly wandering around with all the trappings of a successful barrister enjoying high-powered connections.

London’s Southwark Crown Court was told that apart from telling admirers he was Keir Starmer, QC, the director of public prosecutions, he said he owned a fleet of luxury cars including one used in the James Bond film Goldeneye.

He also allegedly boasted he had socialised with former 007 star Pierce Brosnan, was friends with singer Robbie Williams, and had once been married to British comedy actress Sarah Alexander.

I knew Keir when I interned at Liberty, and afterwards where I helped out a little on the McLibel Trial. He is now married to a former colleague of mine, who clearly must also think him rather dashing.

Indeed, Keir scrubs up rather well, I think: 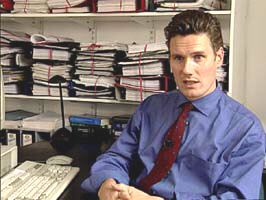 Paul Bint, by contrast, is not a “dish”: 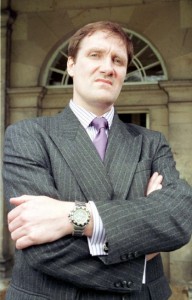 The real Keir Starmer QC would never do this, however:

Altogether, he ”clocked up” five victims, three of them women ”he met either through newspaper dating columns or the internet.

”He then purported to begin friendships with them using this false persona to worm his way into their homes and in some cases into their hearts and their lives,” she added.

Bint, of no fixed address, denies 16 charges allegedly committed between April 27 and May 16 this year.

Nine accuse him of fraud by false representation – one for allegedly cheating a taxi driver of a £60 fare, while the remainder are said to have been committed while systematically milking the bank account of one of his ”conquests”.

Five other counts claim he drove various cars while disqualified. He allegedly pretended he was interested in buying one of them, a £59,000 Audi R8, while the rest were owned by two of the women he targeted.

The genuine Keir Starmer QC would never do this, either:

The barrister said that, about the time Bint was planning a third “conquest” with yet another Sunday Times lonely heart advertiser – again pretending he was the DPP – he was trying to dissuade his first victim from striking up a relationship with somebody else.

“Bint knew she wanted to advance her relationship with the other man and said he had run some checks on him. He said the checks had revealed that person had assaulted his ex-girlfriend on three occasions.

“As a result she cancelled her date with the man and then took a sleeping pill as she was so upset.

“The next morning she woke up early and found Bint in the back garden smoking a cigar. He told her she didn’t want to see what had happened. But she went outside and saw the word ‘bitch’ had been written on the side of her house in white paint. Again she was upset, thinking the other man had done it,” said counsel.

The barrister added that, when arrested, Bint denied any wrongdoing, but allegedly told officers he had used the name Keir Starmer and pretended to be a barrister because “he wanted to”.

Ironically, as Director of Public Prosecutions, the real Keir Starmer QC is nominally in charge of prosecuting this fellow.