Sunday’s Washington Post had yet another article about the nasty, in-your-face state of political discourse in the US.

It has been nearly a year since Barack Obama, running as a uniter and not a divider, was elected president by the largest margin in 20 years. The loop on cable news of thousands of beaming faces in Chicago’s Grant Park has given way to a summer and fall of thousands of other faces contorting in defiance and fear. A congressman yelled “You lie!” at the president on national TV. A liberal bit off the finger of a conservative during a confrontation over public health insurance.

On Friday, just hours after Obama was awarded the Nobel Peace Prize, Republicans and Democrats were at their battle stations again.

The nation’s political discourse seems sour, angry, even dangerous; “uglier than it’s ever been” is a phrase often volunteered — as if President George W. Bush had never been depicted as Hitler, declared a dunce and heckled by Code Pink during his second inaugural address.

A video of school children in New Jersey singing a song praising Obama is some of the latest fuel for rightwing rage against the President (who, of course, had no more to do with it than he did with his selection for the Nobel Peace Prize).

Critics are using the YouTube video of the children’s song to argue that Obama is becoming a brainwashing dictator. To raise money for the Republican National Committee, Chairman Michael S. Steele has compared the song to “the type of propaganda you see in Stalin’s Russia.”

Charisse Carney-Nunes, a children’s author who was doing a reading at the New Jersey school that day and who had nothing to do with the song, became the object of rage and threats.

“I was fearful,” she said. “I was looking over my shoulder.” The disrespect for the office of the presidency disturbed her. “I won a contest in college and President Reagan gave me an award, and that signed letter is still hanging in its frame in the foyer of my mother’s home. We are very proud of that letter, even though my mother didn’t vote for him.”

Still, it helps to put these explosions of political anger into some historical perspective.

The Post article recalls the radio priest Father Charles Coughlin, a one-time supporter of Franklin D. Roosevelt, who turned viciously against him after a couple of years into his presidency.

The great betrayer and liar, Franklin D. Roosevelt, who promised to drive the money changers from the temple, had succeeded [only] in driving the farmers from their homesteads and the citizens from their homes in the cities. . . I ask you to purge the man who claims to be a Democrat, from the Democratic Party, and I mean Franklin Double-Crossing Roosevelt. 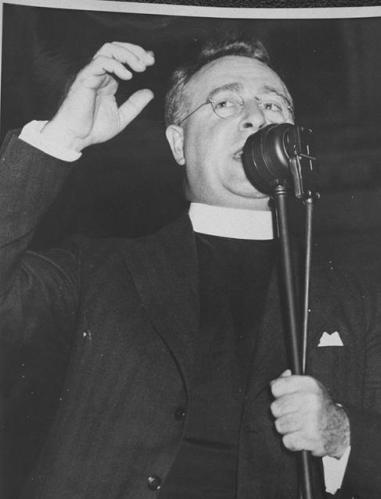 Much like Glenn Beck today, Coughlin raged against sinister and powerful forces supposedly controlling the lives of ordinary Americans. However, distinctly unlike Beck, he aimed his wrath mostly at wealthy capitalists and “Jewish international bankers” while praising the actions of Hitler and Mussolini.

Also unlike Beck, who gets about 3 million viewers for his nightly Fox News show, Coughlin drew enormous audiences. At his height, his weekly radio show was reported to attract an audience of between 30 and 40 million– this when the US population was less than half of what it is today. By that standard, Coughlin was vastly more popular than Beck, Limbaugh, O’Reilly, Savage and Hannity combined.

And yet– despite Coughlin’s efforts to defeat Roosevelt in 1936, including support for a third-party candidate– FDR won a huge reelection victory, carrying every state except Maine and Vermont.