“I respect all the sports, all of them, but there are sports and there are sports,” Chávez said, wearing his trademark green military-style suit and facing supporters attending his national television show this summer. “Can someone tell me, ‘Is this a sport of the people?’ ”

“Noooooo,” government ministers and other officials in the audience dutifully replied.

“It is not,” Chávez concluded.
…..
It is unclear why Chávez has turned his attention to golf, though the famously impulsive leader has a wide range of adversaries he frequently assails. Along with the CIA, perhaps none is on the receiving end of his invective as much as the rich.

And as Chávez pointed out on his show, Aló Presidente, no sport is as associated with the moneyed class as golf.

During an exchange with one of his red-shirted followers, Rafael Isea, the governor of Aragua state, Chávez asked, “You play golf?”

“I played a while ago,” Isea said, stumbling over his words. “No, I don’t play.”

When the governor tried to explain that there was only one course in the city where the show was being staged, Maracay, a disapproving look crossed Chávez’s face.

“You defend it?” Chávez asked.

Isea answered: “No, absolutely not.”

Chávez and other government officials have said golf courses could be better used as housing for the poor or as public parks. In Caracas, clogged with traffic and marked by slums and old apartment blocks, there are few who would deny the need for more green space.

Now I don’t play golf myself. And even if I did, I would have no objection to the public takeover of a golf course in the middle of a crowded city and its conversion to purposes that would serve more people. But Chavez’s denunciations of “bourgeois” golfers seem a little, um, stereotyped.

Here in the US, at least, golf is widely played by members of the working class. When I lived in St. Louis, almost every local building trades union sponsored a golf tournament for its members.

In Venezuela, golf may be a favorite sport of the well-to-do (and these days that includes a lot of Chavez’s bolibourgeois supporters), but “working-class Venezuelan golfers are now making a name for themselves on the international circuit. The most notable name tossed about is that of Jhonattan Vegas, whose father worked as a caddie.”

I don’t know if Chavez ever saw the photo of his revolutionary heroes Castro and Guevara (wielding the putter) engaged in bourgeois activity on the links. 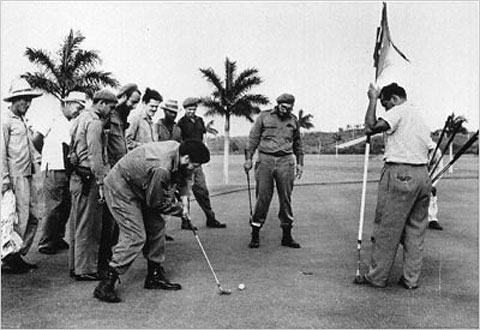 According to Castro, it was intended to mock then-President Eisenhower, a famously avid golfer. For the sake of the revolution, I just hope they didn’t enjoy themselves.

There’s a less famous photo, of somewhat doubtful authenticity, showing another of Chavez’s heroes hitting a long drive on the ninth hole at the Politburo-members-only Workers and Peasants Country Club outside Moscow in 1920. 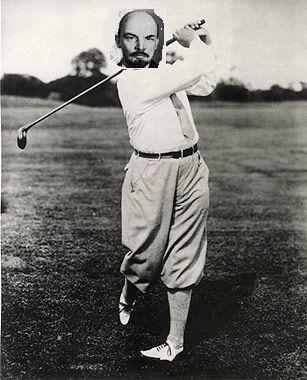 Of course it would never occur to me that Chavez is raising a fuss about golf in an effort to distract people from such matters as wealthy Chavez supporters and opponents getting rich from the government-backed dual exchange system, or the abandonment of 2,000 of the Barrio Adrento health clinics established by the Chavez regime and staffed largely by Cuban doctors (many of whom are decamping to the United States).