Richard Bartholomew posted yesterday on a rather disturbing piece of graffiti that appeared on the side of a restaurant last year: 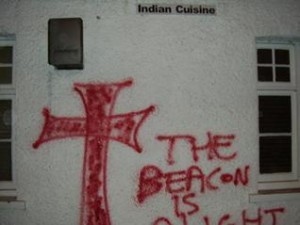 Redolent of Ku Klux Klan imagery, the purpose of this piece of vandalism was clearly to strike fear into the hearts of Muslims.

But Paul Ray, a blogger who styles himself “Lionheart” and who appears in our banner sporting  a photoshopped ‘crusader’ outfit, had an explanation:

This Indian restaurant is owned by Pakistani Moslems connected to the Jihad army of Bury Park Luton and is probably the furthest outpost they have which is deep into Our countryside. This building used to be a local pub selling the usual home cooked food and serving local ale, now it is an Indian Restaurant owned by Luton Pakistani Moslems…The restaurant sits at the ‘Heart’ of Our local countryside …I personally look forward to the day that we are posting news of acts of war against the Moslem community and not just graffiti.

Right. An anti-Muslim bigot of the worst sort. Even if this so-called “Jihad Army of Bury Park Luton” exists, it is pretty clear from Paul Ray’s last sentence that he is hostile to Muslims, generally.

The photograph of the graffiti found its way into an English Defence League video: 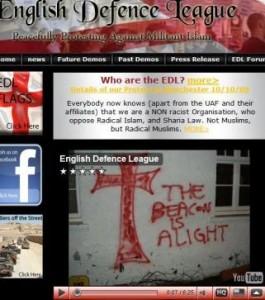 It is a quite remarkable co-incidence that Ray just happened to chance upon a piece of anonymous graffiti that reflects his particular religious and political perspective and symbolism, but there it is.

Richard has today uncovered another amazing coincidence. Paul Ray just happens to have a crucifix tattooed on his arm that, fortuitously, is of the same design as the graffiti on the wall of the Indian restaurant. The photograph predates the graffiti. 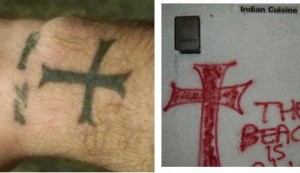 I wonder who vandalised that Indian restaurant. Any guesses?