Other speakers at the meeting include Galloway and Shamiul Joarder of Friends of an Aqsa, the dedicated Israel hatred group headed by Ismail Patel.

The meeting will be held at the Brady Centre, a Tower Hamlets facility which is not very particular about its guests. As we learned in April, even a video message from al Qaeda preacher Anwar al Awlaki is acceptable for the Brady Centre. 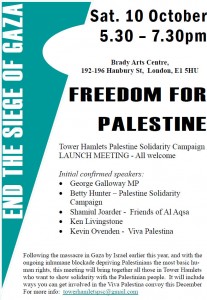 The flyer notes that “ways you can get involved in the Viva Palestina convoy this December” will be discussed. This is of course how the first convoy to Gaza ended – with a celebration of Hamas and cash for the terrorists.

As reported here before, one of Viva Palestina’s two trustees is Sabah al Mukhtar, a man George Galloway has called “my right hand” in the first convoy.

Sabah al Mukhtar passes the Daryl Bradford Smith anitsemitic lunatic test with flying colours. You can listen to them here. Note Sabah on the antisemitic hoax “The Protocols of the Elders of Zion”:

Viva Palestina is under investigation by the Charity Commission. This takes some doing when the commission typically turns a blind eye to obvious abuses of its counterterrorism guidelines and violations of financial sanctions against Hamas.