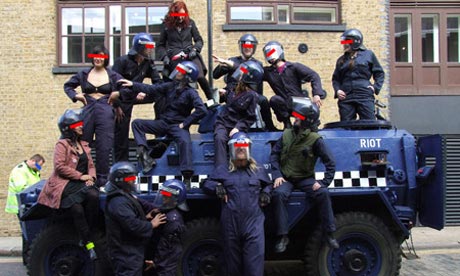 It’s no secret that I think the Indymedia kids are loons. Having actually grown up in a police state, I find it quite disquieting that these Che Guevara wannabes charge around shouting “Police State!” and “Fascist” at Britain’s comparatively disciplined and – dare I say, placid – police force. They appear to have no appreciation of how much freedom and safety we enjoy in the UK today compared to most of the world.

But, having said that, I am often left gasping at the stupidity and incompetence of our authorities. Last week it was harassing parents with reciprocal child-minding arrangements, previously it was that gift to the tabloids: using anti-terror legislation to spy on wheelie-bins. And now there is this:

The people in the picture above are being charged with – wait for it – “impersonating police officers”.

Now, it’s a perfectly reasonable law to have. People who pass themselves off as police officers – that is to say, attempt to lead people to believe they are police officers in order to abuse the authority police officers have – should be charged and punished. Most likely they have done this in order to deceive or to commit some kind of fraud, and the law is rightly concerned. But the law was not made to harass guests at fancy-dress parties, practical jokers, people enjoying dress-up sex games, or members of the Village People!

“The spirit of the law” isn’t just a throwaway platitude. It is an important element of justice. It implies that we, as a society, trust our authorities to show discretion, common sense and sound judgement in understanding the meaning of the law and its intentions.

So the arrest and prosecution of these satirical G20 protesters is outrageous! What’s worse, it is an example of just the sort of abuse of police power that they were satirising.

It makes me afraid of the police and fear the law; not of their cruelty and power, but of their stupidity. It is is very disconcerting that such incompetents are running our police and justice departments.