Last month, the Swedish newspaper Aftonbladet published an article alleging that Israeli soldiers kidnapped Palestinian civilians and stole their organs, before returning their mutilated bodies to their families. This story provoked a storm of protest, as many saw it as a revival of the medieval antisemitic myth of the blood libel.

One feature of the blood libel charge during the Middle Ages is that an allegation in one locale would spark similar accusations against Jews elsewhere; and so it has proved with this latest version. On 6 September, some two weeks after theAftonbladet article, a story appeared in an Arabic newspaper, al-Marada, claiming that “Jewish rings” were kidnapping Algerian children and smuggling them to Morocco, where their organs were extracted for export to America and Israel. This story was quickly translated into English, spliced with some out-of-context quotes from the genuine organ-trading case in New York this summer, and circulated on the internet.

Press TV, the Iranian government’s mouthpiece in the UK, was quick to pick it up, and headlined their story: “New Jewish organ theft gang busted”. No beating about the bush there; but then Iranian state broadcasters have a history of promoting blood libels against Jews, such as the TV series Zahra’s Blue Eyes, shown on Iranian television in 2004.

The Adolf Hitler Research Society also published the story on their website. They dubbed it: “Missing Algerian Children Had Their Organs Removed by Vampires”.

It is not a surprise that either of these outlets thought that the story was both true and worth reporting, rather than an obviously antisemitic libel. More suprising perhaps, is the fact that it also appeared on the website of the Muslim Association of Britain (MAB) [Removed today following article in TheJC. 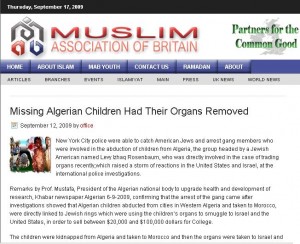 This story has nothing to do with Israel, other than that Israel is named, along with America, as one of the ultimate destinations of the organs. The allegation is against “American Jews”, “Jewish rings” and a “Jewish led network”. The usual defence of merely being anti-Israel, not antisemitic, has no place here.

The MAB is a member of MINAB, the Mosques and Imams National Advisory Board, which was set up by the government in 2006 as part of their strategy against violent extremism. The MAB is one of four founding members of MINAB, and consequently has four guaranteed seats on its Executive Board.

As a child of the government’s Prevent strategy, MINAB has received extensive state funding in recent years: £75,600 from the “Community Leadership Fund” in 2007/8, and £116,000 from the same fund in 2008/9. They are also partners in a series of workshops run for young Muslims by the thinktank Demos, which are funded by the government to the tune of £65,624; and provide specialist advice to the Charity Commission’s Faith and Social Cohesion Unit.

This is not the first time that the MAB has published antisemitic propaganda. In October 2000, the MAB’s newsletter New Dawn printed the ‘Franklin Prophecy’ under the headline “The Jewish Threat on the American Society”, a 1950s Nazi hoax which claims to quote Benjamin Franklin warning that Jews are vampires who destroy every society in which they live.

The MAB’s role in MINAB has been questioned before, due to their strong connections to the Muslim Brotherhood, which have been covered extensively elsewhere. This latest episode is yet more evidence that if you are looking for a genuine partner in “Community Leadership” and “Social Cohesion”, the MAB is not the right place to look.

Update: this is the image the MAB used to illustrate the story. Warning: graphic and offensive.