There has been a certain amount of excitement over the discovery that somebody at Human Rights Watch has been posting defences of Marc Garlasco on various websites, under different names. So far, we’ve had a Dash F, a Tom K, a Sara and a (boy named) Sue.

All this sockpuppetry reminds me of some funny goings on in the world of queer politics, a couple of years ago.

Both Tatchell and Alekseyev are grassroots ‘direct action’ activist who don’t respect Long’s self-appointed role as “global gatekeeper” of all matters relating to gay political activism, and who don’t play the ‘international NGO game’. Long has spent an inordinate amount of time and effort feuding with these two activists in the gay press and on various listservs and discussion groups.

Long’s line of attack on these two activists is particularly nasty. In many ways, it is similar to the line taken by the authors of a supposedly ‘academic’ book for which the publishers have now had to apologise and issue a detailed retraction. His modus operandi, in a nutshell, consists of cheap and groundless accusations of racism, colonialism and Islamophobia.

These are the familiar slurs of the far Left activist. They work best when the person deploying them is not, as Long is, a white, male Westerner.

So, when Long criticised Tatchell’s campaigning around the execution of gays in Iran, it was really convenient when an Middle Eastern activist by the name of Zayed Salloum entered the debate and supported Long’s attacks on Tatchell.

Salloum raged against Tatchell on listservs and even wrote a letter to Islamophobia-Watch, which Bob Pitt published in full.

He also was particularly fierce in his defence of Scott Long. See here:

Also in ten years of fighting for gay rights on the ground in places like Zimbabwe, Egypt, and Romania, I’ll bet Scott Long has done more for the human rights of lesbian, gay, bisexual, and transgender people than you have, libhom. Not to mention most of the other armchair activists who are attacking him.

I think everyone should read it for themselves and try to judge what it says about the Iranian situation, particularly because it has become the basis for a lot of vicious personal attacks on Scott Long and other activists.

Trouble was, no one had ever heard of “Zayed Salloum” and, soon after the debate had moved on, he disappeared into obscurity, never to be heard of again. Google him and you’ll see what I mean.

But it gets even curiouser. Salloum, always posted as if he had no real contact with Long or direct knowledge of Human Rights Watch. One day he slipped up. He posted to a Yahoo Discussion Group from an IP address inside the Human Rights Watch building in New York!

And the evidence is here. 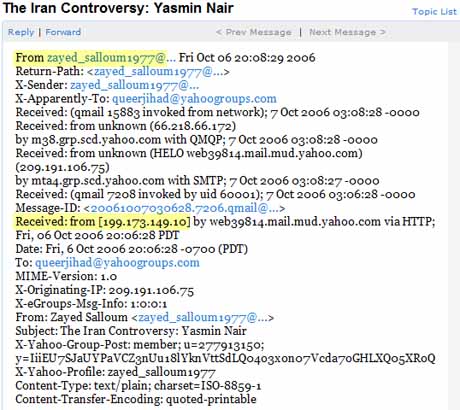 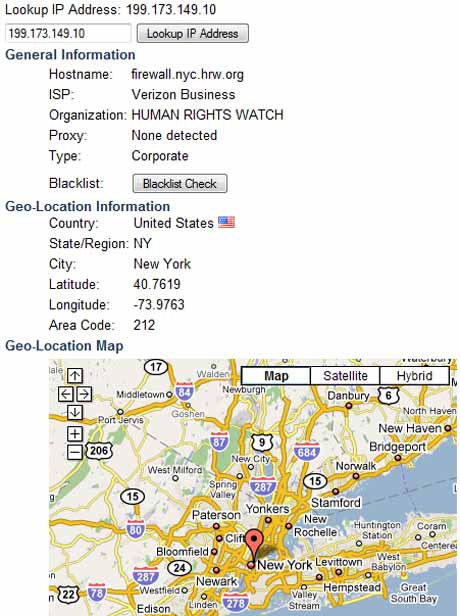 So, what exactly is going on here?

Was Zayed Salloum a real person? Was he Scott Long’s sock puppet, or simply another person working at Human Rights Watch who happened to have the same perspectives on politics and same antipathy to Peter Tatchell as Scott Long?

It has to be one or the other.

I would like to know if staffers at Human Rights Watch created a fake ‘activist’ with a Middle Eastern sounding name to forward its statements, to support arguments made by HRW officials, and to smear critics. I can’t tell you any more than this: but I think that someone at Human Rights Watch ought to investigate.

Were Human Rights Watch to be found to have engaged in such immoral and unethical behaviour, it would call into question their suitability as a monitor of global human rights abuses. The type of sockpuppetry that I suspect may have taken place at Human Rights Watch amounts to the propagation of a fiction. What is more, Zayed Salloum – with the help of his ethnicity – directed and shaped the debate. That sort of conduct is incompatible with what should be the core function of Human Rights Watch:  objectively to view, analyse and report on situations on the ground.

My real concern is that Human Rights Watch may have been infiltrated and compromised by far-left activists, and that their conduct is undermining the mission of this important body.  I hope I am wrong, but either way, I’d like to know.