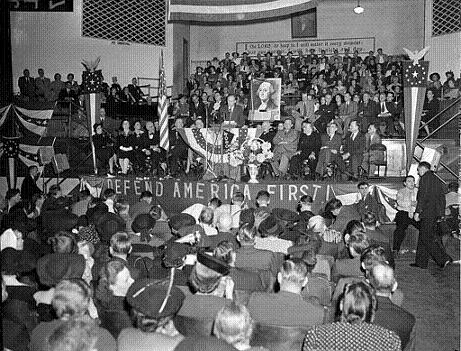 Sixty-eight years ago tomorrow, on September 11, 1941, the famous aviator, isolationist and antisemite Charles Lindbergh spoke the following words to a meeting of the anti-interventionist America First Committee in Des Moines, Iowa:

It is not difficult to understand why Jewish people desire the overthrow of Nazi Germany. The persecution they suffered in Germany would be sufficient to make bitter enemies of any race.

No person with a sense of the dignity of mankind can condone the persecution of the Jewish race in Germany. But no person of honesty and vision can look on their pro-war policy here today without seeing the dangers involved in such a policy both for us and for them. Instead of agitating for war, the Jewish groups in this country should be opposing it in every possible way for they will be among the first to feel its consequences.

Tolerance is a virtue that depends upon peace and strength. History shows that it cannot survive war and devastations. A few far-sighted Jewish people realize this and stand opposed to intervention. But the majority still do not.

I don’t know exactly who these “few far-sighted Jewish people” were; even the Jewish Communists and fellow travelers who had dutifully accepted the party’s anti-interventionist position after the Hitler-Stalin pact had fallen into line with demands for intervention after the Nazi invasion of the USSR in June of that year. But I suppose there were a few American Jews who believed that by encouraging the US to join the war against the Nazis, they would make themselves potential victims of Hitler’s wrath. Perhaps Lindbergh, while disapproving of Nazi vengeance against pro-war Jews, would have considered it “understandable.” And even today, we have a small minority of Jews who consider themselves far-sighted enough to oppose the very existence of the world’s only Jewish-majority state– for the good of the Jewish people, of course

Lindbergh’s trope is all too familiar: antisemitism masquerading as solicitude toward the Jews. Consider his next sentence about the people for whose fate he cared so much:

Their greatest danger to this country lies in their large ownership and influence in our motion pictures, our press, our radio and our government.

Less than three months later, on December 7, 1941, it was all moot. The America First Committee dissolved shortly thereafter.

Of course none of Lindbergh’s patronizing, foolish and reactionary attitudes towards the Jews have survived, let alone infected portions of the portions of the Left where Jews have to prove their anti-Israel credentials before being accepted as comrades. Have they?