Taking a break from his whirlwind tour of some of the planet’s most repressive regimes (including Libya, Syria, Iran, Turkmenistan and Belarus), Hugo Chavez hit the red carpet at the Venice Film Festival for a showing of Oliver Stone’s fawning documentary “South of the Border.” 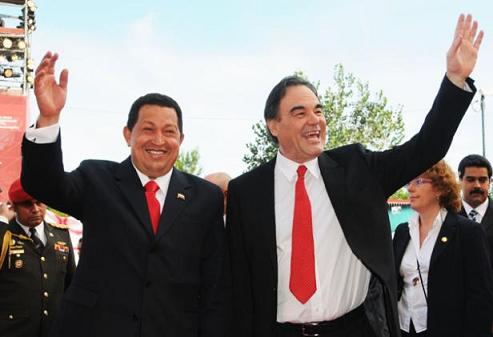 Love the matching suits and ties.

According to The Telegraph, Chavez– accompanied by 50 bodyguards– arrived at the Venice Lido by helicopter because he suffers from sea sickness.

In Venice, two protesters carrying anti-Chavez placards were refused entry while a team sporting a huge “Bienvenude Presidente” banner were waved inside the theatre to join the mushrooming crowd.

Tilda Swinton walked by, followed by screenwriter Tariq Ali, before Stone and Mr Chavez emerged from their car. The president, surrounded by an army of bodyguards, seemed to revel in the adulation and separated from his protection to throw a flower to a pretty girl in the crowd.

Mr Chavez spent 30 minutes on the red carpet signing autographs and posing for photos before being ushered into the auditorium where he was given a standing ovation. As is the norm at film festivals, the biggest star was given the final introduction and Mr Chavez rose from his chair and waved to the crowd, who started singing his name.
…..
Speaking at the festival earlier in the day, Stone attacked the Western media’s depiction of Mr Chavez. He said: “I originally proposed to do a documentary on Chavez showing the ridiculous level of stupidity and broad statements in the constant media attacks on him. We show that in the film, but I realised that such a documentary was too small for this man. Chavez is a big phenomenon and much more than the attacks in South America.”

Stone, who has previously made a controversial documentary on Fidel Castro as well as portraying George W Bush in W, said his attempts to make a documentary on Iranian president Mahmoud Ahmadinejad are being thwarted by scheduling conflicts.

An Oliver Stone documentary about Chavez’s partner in “anti-imperialism” Ahmadinejad?

“Helping the oppressed and revolutionary nations and expanding anti-imperialist fronts are the main missions of Iran and Venezuela,” Ahmadinejad said after meeting Chavez who is on a two-day visit to Tehran.

The regular visitor to the Islamic republic also said Tehran and Caracas “should help revolutionary nations by strengthening ties between the two nations.”