The Telegraph has an interesting selection of screen grabs entitled ‘How 20 popular websites looked when they launched’.

Have a look and relive some memories.

The BBC, YouTube, Google: they’re all there in the internet equivalent of black and white.

One exception from the list, however, is Harry’s Place. To remedy that state of affairs I’ve dredged up an old Harry’s Place masthead we sported shortly after Saddam Hussein’s regime was toppled in Iraq.

Note for newer readers: The young lady in red on the right hand side is an Iraqi Communist celebrating the legalisation of leftwing political parties and the return of elections brazenly demonstrating her party’s deviationist collaboration with the occupiers and foolishly flaunting her status amongst all right-thinking Leftists as a quisling fit only to be shunned. 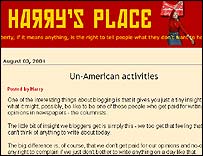