The United Nations Relief and Works Agency pays for the education of 200,000 Palestinian children in the Gaza strip.

It has produced a new history book designed for 13 year-olds which it wants to introduce into schools. The book contains, as history books do, a chapter on the Holocaust.

The Gaza strip is run by Hamas.

You can, of course, guess the rest:

In an open letter to local UNRWA chief John Ging, the movement’s Popular Committees for Refugees said: “We refuse to let our children study a lie invented by the Zionists.”

The Holocaust. A lie invented by Zionists.

Hamas is frequently at loggerheads with the U.N. refugee agency, which it considers the only serious challenge to its control of Gaza. Over the summer, Hamas accused the U.N. of spreading “immorality” in summer camps for children, because it offered activities such as folk dancing and crafts.

I wonder if the British ‘Marxist’ left ever think back to the day they decided it would be a good idea to turn up on marches cheerfully toting ‘We are all Hamas now’ banners and chart the latest stage on their sad little journey towards utter irrelevance from that moment. 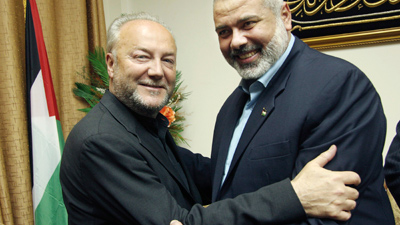