“Al Quds Day” (“Jerusalem Day”) is an annual march for Israel haters, held worldwide on the last Friday of Ramadan. It was established by the Ayatollah Khomeini.

In London the march takes place on the weekend. It is organised by the self-styled Islamic Human Rights Commission (IHRC).

The IHRC is a Khomeinist group which campaigns for convicted and suspected terrorists (here are some examples) and other Islamist causes, such as backing the bizarre Neturei Karta sect, Tehran’s favourite token Jews, who attended Ahmedinejad’s Holocaust denial festival in 2006. Showing its colours, the IHRC has also mounted a verbal attack on the Community Security Trust (CST), the safety body of the British Jewish community. The CST answered here.

This was the “we are all Hezbollah” crowd at last year’s al Quds march:

This year the event is scheduled for Sunday September 13, starting at Marble Arch at 1:30 PM and ending with a rally in Trafalgar Square.

This is the line-up of speakers and supporters: 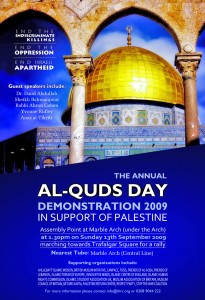 Among this year’s speakers, here is Aharon Cohen of Neturei Karta, droning on at the 2008 march about “divinely decreed exile”, enabling Zionists-are-Nazis language, and calling for the dissolution and disbandment of the state of Israel:

Another speaker, Daud Abdullah, will be familiar to readers of this blog. He is the deputy secretary general of the Muslim Council of Britain, which is backing the march. He is also a signatory of the Istanbul declaration (pdf). In the name of Islam, it celebrated the “victory” of Hamas in the Gaza war and condemned the Palestinian Authority, potential peacemakers with Israel among Arab leaders, European navies on any Gaza weapons interdiction mission, and foreign supporters of Israel, alongside the perfidious Jews, sorry, I mean Israelis themselves.

Here is Abdullah at last year’s march, making the grossly incendiary claim that Israel is trying to destroy the al Aqsa Mosque in Jerusalem, the third holiest site in Islam:

And here’s Yvonne “Drinking Coca Cola is like drinking the blood of Palestinian children” Ridley. Yes, she really did say that, at the 2006 march:

In addition to the Muslim Council of Britain, “supporting organisations” of this year’s march include FOSIS, a British Islamist student association; Friends of al Aqsa, a dedicated Israel hatred group headed by the antisemite Ismail Patel; Neturei Karta; the “Respect” party of George Galloway; and the “Stop the War Coalition”.