This is a guest post by Khalid ibn al-Waleed

The Scottish Islamic Foundation, the slick Islamist-friendly group headed by Osama Saeed and his brother Sohaib (both former spokesmen for the Muslim Brotherhood front group Muslim Association of Britain), yesterday sent around a begging letter to its Facebook supporters.

The grovelling missive, authored by Asif Ahmed, the SIF’s chairman and a former FOSIS man, cynically attempts to uses Ramadan to persuade Muslims that the group is a charity they should support:

”This Ramadan, I’d like to ask you to consider supporting the SIF financially. We were founded to build bridges between Muslims and others, something I’m sure you’ll agree is vitally important with the rise of the far-right and Islamophobic attacks. We have achieved a lot in the year since our launch in June 2008 … We need your help to maintain our fulltime status and achieve the things that need to be done. In the current economic climate, we face a challenge as a young organisation to remain financially stable.”

Bizarrely, the letter makes no reference to the immediate cause of the SIF’s sudden financial difficulties.

Earlier this month, the SIF were forced to hand back a whopping £128,000 grant from the Scottish government (from a total of £400,000 that they have received so far) after the government grew alarmed about financial “irregularities”. It turns out that the grant was supposed to have been used by the SIF to fund an Islam-themed festival but, unfortunately for the Saeed boys, the Scottish government noticed that the event never materialised – and promptly demanded their money back.

What is disturbing about this incident was that the Scottish government only asked for their money back because the event had not been held.

It apparently did not disturb the Scottish government in the slightest that the event, provisionally titled ‘Islamfest’, was explicitly modelled on the UK Muslim Brotherhood’s two-yearly hate-filled “nutterfest”, otherwise known as IslamExpo.

Osama Saeed, the SIF’s slimey leach-in-chief, who, as well as being the organisation’s CEO also doubles as an SNP candidate, had even invited Mohammed Sawalha, a senior MAB man and fugitive Hamas commander, to meet the Scottish culture minister, Linda Fabiani.

Anyone in any doubt about what Osama Saeed and his chums were planning for “IslamFest” had only to look at his track record, which includes:

– Supporting a Caliphate (“a restored caliphate is entirely compatible with democratically accountable institutions”).

– Defending religiously mandated punishments (“The aim of Islamic law, contrary to popular belief, is not punishment by death or amputation of body parts. It is to create a peaceful and just society”).

– Calling for censorship of offensive cartoons (“You just don’t do pictures of the Prophet, period. It’s a cultural thing, accept it and respect it”).

– Encouraging resistance against the police (“Their job is to always push the boat out, to push the limits they can push, to come out and snoop and to erode freedoms. But our job equally is to resist that, and resist that we must”).

– Defending pro-jihadist preacher Anwar Awlaki. (“He preached nothing but peace, and I pray he will be able to do so again.”)

The SIF had also hosted a variety of far-right Islamist loons at its events in Scotland, including veteran Muslim Brotherhood leaders such as the legendarily crazed Kemal Helbawy, a former Muslim Brotherhood spokesman, who advocates the killing of Israeli children (they are “future soldiers” apparently).

As if this wasn’t enough, Osama’s brother Sohaib (head of the SIF’s “dialogue and education” working group) is even more wild-eyed, even defending Muslim Brotherhood leader Yusuf Qaradawi in a CiF article memorably entitled ‘If Qaradawi is an extremist, who’s left?’ (the obvious answer, “rather a lot of people actually”, somehow escaped PhD candidate Saeed) while even brazenly setting up the Qaradawi Appreciation Society page on Facebook.

Yet apparently none of this insanity was enough for to make the SNP or the Scottish government question the wisdom of gifting £100,000s to the Saeed brothers. It seems alarm bells rang at Scottish government HQ only when it emerged that the returns on its investment in the Saeed clan were paltry.

However, the times may be a-changing for Osama Saeed and his slimy Islamist chums. Suddenly they have tried to clean up their act.

Sohaib Saeed has quit as administratorto Facebook’s Qaradawi Appreciation Society and has even recently quit being an admin on another of his pet projects, a Facebook dedicated to rubbishing the secular Muslims of the Quilliam Foundation.

Even more significantly, the SIF have also lately deleted the pages on their website that refer to their controversial hosting of Kemal Helbawy and the head of the Libyan Muslim Brotherhood: 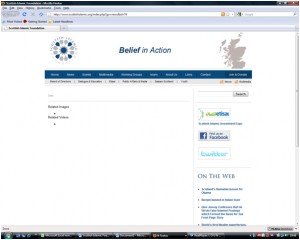 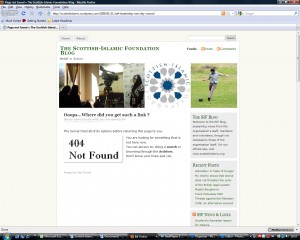 Although they may not admit it, it is clear that the SIF’s very survival is at stake after the loss of a large chunk of their government funding. They are now desperately trying to “act sensible” for a bit while the Saeed brothers find a new way to leech off the Scottish taxpayer.

The government’s decision to demand their money back from the SIF is particularly bad news for Osama Saeed who is the SNP’s candidate for the Westminster seat of Glasgow Central. His Islamist ideology exposed, Osama is additionally now exposed as a grasping vampire leech, remorselessly sucking taxpayer money out of the body politic of Scotland and, when that teat ran dry, even trying to coax donations to his “charity” out of ordinary good-hearted Muslims during Ramadan: 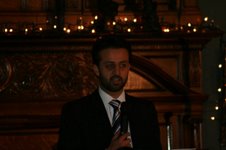 Osama’s close links to the SNP’s hierarchy and especially Alex Salmond have saved him in the past. But this time, with Salmond already in hot-water over the release of the Lockerbie bomber, even the intervention of the SNP’s very own ‘Jabba the Hutt’ might not be enough to save Osama from himself.