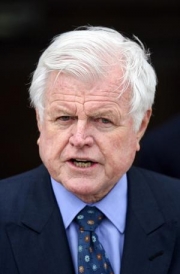 [W]hile the White House eluded his grasp, the longtime Massachusetts senator was considered one of the most effective legislators of the past few decades. Kennedy, who became known as the “Lion of the Senate,” played major roles in passage of the Civil Rights Act of 1964, the Voting Rights Act of 1965, the 1990 Americans with Disabilities Act and the 1993 Family and Medical Leave Act, and was an outspoken liberal standard-bearer during a conservative-dominated era from the 1980s to the early 2000s.