Lately it seems– in the words of the late, great Rodney Dangerfield– that Hezbollah don’t get no respect. 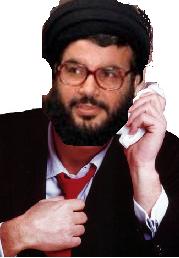 In June their coalition lost a parliamentary election in Lebanon that they were widely expected to win. And of course Hezbollah’s chief patron, financial backer and weapons supplier– the Islamic Republic of Iran– has had a rough go of it since its own people refused to accept quietly the results of a phony Presidential election the same month. Hell, they aren’t even chanting “Death to Israel” on demand anymore.

In July the United Nations took a break from accusing Israel to accuse Hezbollah of violating the UN-brokered cease-fire that ended the 2006 Second Lebanon war by stockpiling weapons at a depot that exploded.

Now comes a report and a video from the IDF of residents in the southern Lebanese village of Marwakhin driving away Hezbollah operatives attempting to take over houses to store weapons.

Didn’t their allegedly smashing victory over Zionist aggression in 2006 mean that the name Nasrallah now rings in joy around the world?