Earlier this month it emerged that jihadi preacher Anwar al-Awlaki was scheduled to speak, via a video link from Yemen, at a “Cage Prisoners” Ramadan fundraiser on August 30. The venue Moazzam Begg’s outfit chose was Kensington Town Hall in London, which accepted the booking.

Awlaki’s participation was alarming because he is a direct threat to the UK.

He lived in the UK in 2003 and 2004 and appeared at several radical events. Here is part of a speech he gave at the East London Mosque in December 2003 at an event organised by the Islamic Forum of Europe. He urges Muslims to spring to the defence of their “brothers” in custody for terrorism offences and to refuse to co-operate with the police, or shaytaan (Satan):

Well, here is some news from today’s Observer:

An Islamist preacher has been banned from addressing a major British fundraising event amid claims he backs attacks on UK troops and supports terrorist organisations linked to Al Qaeda.

The revelation that Anwar al-Awlaki, a Yemen-based preacher accused of advocating violent jihad, was due to speak via video link at Kensington town hall later this month, has raised fears public buildings are being used for extremism. A spokesman for Kensington and Chelsea council said: “Some of the views expressed by Mr al-Awlaki in the past are not appropriate for broadcast in [council] premises.”

The council banned al-Awlaki from speaking only after politicians and anti-extremist groups raised concerns about his appearance at the Cage Prisoners event, which will raise money for Muslims held in Guantánamo Bay.

Actually, the terms and conditions (pdf) for letting premises at Kensington Town Hall are quite clear. The council could have gone even further:

3.6 Where the Supervising Officer reasonably believes that the hiring:

Injures or is likely to injure the reputation of the Council or offends against any statute or regulation binding upon the Council he may without further liability and at his absolute discretion terminate the hiring immediately on notice.

It should go further. If some of Awlaki’s views are “not appropriate”, what about Yvonne Ridley, who is also scheduled to speak:

“She told a meeting on Tuesday that Muslims should “boycott the police and refuse to co-operate with them in any way, shape or form”.

She said: “From today until this terrorisation of the Muslim community is stopped immediately, I believe all
Muslims should withdraw their support,” she said.

“This goes from asking the community copper for directions to passing the time of day with a beat officer.

“We should enforce non-co-operation.”

Or try her views on al Qaeda’s Abu Musab al-Zarqawi, the bomber of Amman, among many other monstrous crimes:

“But let’s have a closer look at those who perished. Five of those who died were Iraqis who were working closely with America — in other words, collaborators. One Saudi, Indonesian and three Chinese intelligence officers were also wiped out — shame, but those who live by the sword. And then there was the wedding party. OK, so the guests were part of Jordan’s upper echelons of society, others had flown in from America and were known for their close ties to the monarchy. But that still doesn’t mean they should be punished for their status in life. Interesting though that the bombers chose the bars serving alcohol for their martyrdom operations in two of the hotels. Now while we know alcohol is strictly haram, it’s an Islamic ruling which the King of Jordan chooses to openly ignore, and in a Muslim country.
…
As I said earlier in this column, it is very hard to justify the deaths of innocents. But you know, I wonder if you see that attack on the Jordanian hotels in a different light now?

But let’s get back to the original theme of this column – black sheep and family honor. I think I’d rather put up with a brother like Abu Musab al-Zarqawi any day than have a traitor or sell-out for a father, son or grandfather.” 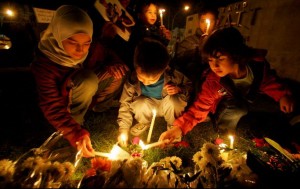 Or this, from one of the annual al Quds Day hate marches in London:

“Drinking Coca Cola is like drinking the blood of Palestinian children”

Amir Sulaiman is another scheduled speaker. He is an African-American Muslim activist and poet. One of his pieces, “Warrior’s Song”, inspired a fan to make this video. Have a look:

This is from another piece, titled “Danger”:

Justice is somewhere between reading sad poems
and 40 ounces of gasoline crashing through windows
Justice is between plans and action
between writing letters to Congressmen and clapping the captain
between raising legal defense funds
and putting a gun on the bailiff and taking the judge captive
it is between prayer and fasting
between burning and blasting
Freedom is between the mind and the soul
it is between the lock and the load
between the zeal of the young and the patience of the old
Freedom is between the finger and the trigger
it is between the page and the pen
between the grenade and the pin
between righteous anger and keeping one in the chamber
…
“I’m a teenage Palestinian
opening fire on an Israeli checkpoint
Pointblank
Checkmate
Now what?
…I am David
with a slingshot and a rock
and if David lived today
he’d have a Molotov cocktail and a glock,
so I say down with goliath
I say down with goliath
But we must learn, know, write, read
we must kick, bite, yell, scream
we must pray, fast, live, dream, fight, kill, and die free.”

“Danger” was broadcast on TV in the US in 2004. The broadcast led to an FBI investigation of Sulaiman. He complained about it bitterly, but the litany only shows why the feds might have taken an interest in him and his associates:

Islam, my way of life, does not allow me to remain still and quiet while a war is being waged not only against Islam and Muslims, but against the Human Family and Life itself. As the hadith of prophet Muhammad (pbuh&f) states, Whoever among you sees wrongdoing should change it with his hand. If he is unable, then with his speech. If he is unable, then with his heart, and that is the weakest level of faith.

A war “against life itself”? To be opposed with the “hand”? I think I know what time it is.

The man who is scheduled to lead prayers at the fundraising event is Moussa Zemmouri, a Belgian who was arrested in Kandahar, Afghanistan, in 2001 and detained in Guantanamo until 2005. He is not a propagandist. No, according to this report, his job was al Qaeda operations, and he was linked to the top of the terrorist group in the run-up to 9/11:

One of 10 suspected Islamic militants on trial in Belgium admitted yesterday being a link between Al-Qaeda leaders in Pakistan and Italy with operatives allegedly planning attacks in Belgium.

Saber Mohammed, an Iraqi national opposed to the regime of Saddam Hussein, said he was given two mobile phones by two men he met in a Brussels mosque shortly after he arrived in Belgium at the end of 2000. He told a Brussels court, where the trial opened amid tight security Monday, that he was asked to receive calls on the phones and discreetly pass on information to the two contacts.

Mohammed said that the two men, “who talked a lot about radical Islam and hated the West,” chose him because
he was “not being bugged,” adding that he was “abused” by them and did not share their views.

According to prosecutors, on June 2, 2001 — three months before the 9/11 attacks — one of the two phones was called three times from Pakistan by Khalid Sheikh Mohammed, considered Osama Bin Laden’s No. 3.

“There were also lots of calls from Essid Sami Ben Khemais,” a Turkish national considered one of Al-Qaeda’s point men in Italy, he said. Khemais was convicted in Milan in 2002 on charges unrelated to terrorism.

The two men for whom Mohammed said he served as “voicemail box” have been named as Moussa Zemmouri, a Moroccan-born Belgian currently detained at the US military base in Guantanamo Bay, and Moroccan Driss Elatellah.

Perhaps the Royal Borough of Kensington and Chelsea could explain why Ridley, Sulaiman and Zemmouri are “appropriate” when Awlaki is not?