I have just returned home from a trip on which I had a chance to see the Mappa Mundi at Hereford Cathedral. The last time I visited it, I was 10. It was about 700 years old, or so. 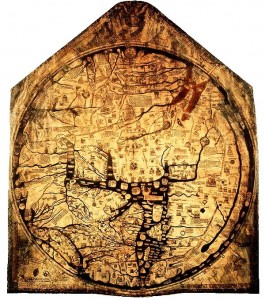 It is a curious map. Jerusalem is at its centre. England, Wales, Scotland and Ireland are all squeezed into the bottom left corner of the map. The greater part of the vellum is given over to fantastical depictions of the Middle East, which largely draw on Biblical sources. The margins are filled with unlikely beasts – men with huge lips, men with one giant foot – both used to shade themselves from the sun – and men with no head but with eyes on their chests. Unicorns. Accounts picked up second, third hand, and embellished with the retelling.

The Guardian sees the world in a thematically similar manner.