This is a guest post from The Definition of a Horse

PressTV is a propaganda wing of the Iranian government, why anyone takes it seriously continues to baffle me. This post isn’t an attempt to persuade people that PressTV isn’t trustworthy – if you’re in any doubts, then I doubt you’ll know bias when it hits you in the face. What this post does aim to do is compile a small collection of articles which I find amusing – because the bias in them is so apparent.

Headlines are very important, the reader gets the gist of what the article is about and it may even sway some people on the topic. Whether or not PressTV knows this, its blatant bias can be seen in some of its headlines;

Really?! Lets assume Israel did think it was it’s obligation to kill Gazans, do you think they are stupid enough to tell the world? The report actually says “Israel had both a right and an obligation to take military action against Hamas in Gaza to stop Hamas‘ almost incessant rocket and mortar attacks upon thousands of Israeli civilians and its other acts of terrorism.”

2. “Israel rules out evacuation of settlers”

This is entirely misleading. If you read the whole article, it sounds like that Netanyahu is saying that Israel will never evacuate any settlements. Reuters, however, managed to portray exactly what Netanyahu meant: “Netanyahu, who has said he wouldn’t build additional settlements but wants to continue construction in existing enclaves to accomodate what he calls natural growth, said Sunday he would not remove any settlements before a peace deal.” Whats even worse, settlers were evacuated within a week of the article.

As with the first, PressTV jumps the causal chain. The US is not rejecting the demand to stop killing, it’s rejecting the call to stop airstrikes and portraying it in this way shows the clear bias. But, it gets worse, on the same day that this article went out, the BBC reported that a review of airstrikes was initiated by the US.

But it isn’t just headlines. PressTV gives a platform to Holocaust “revisionists,” the article in question states that the “alleged massacre of Jewish people by gassing during World War II was scientifically impossible.” It also gives a platform to other conspiracies. One article asserts the “US may have been behind the killing of Neda Agha-Soltan,”the Iranian protestor who was shot and seen as a symbol for the recent Iranian protests. It also gives a platform to 9/11 revisionism, and while I have no objection to this, PressTV refuses in its articles to give the other side. “Mossad linked to 9/11 attacks,” reads the headline. Nowhere do they try to find the other side or even quote the other side. That is not objectivity.

This is also apparent in another article: “CIA report: Israelwill fall in 20 years” – This is complete crap. No other news sources have written about this revolutionary report (maybe because of the evil Zionist media). What makes this even more worrying is that PressTV seem be base entirely on an interview given by Franklin Lamb. Who is Mr. Lamb? Not much is known. However, he writes for anti-Israel publication ‘Counterpunch’ and he may be associated with ‘If Americans Knew’ – which is another anti-Israel organisation (taking the realist position as defined by Dennis Ross).

Pictures and their captions also tell people a lot about PressTV. Neda’s death, aside from being used as a tool against the CIA, was completely ignored for over 12 daysand even then when PressTV decided to write about, the following picture was accompanied; 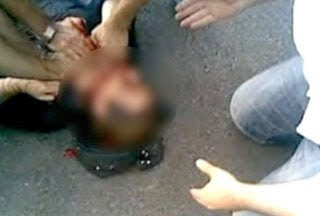 Many news agencies and channels choose to censor images that they deem to be too graphic – there’s nothing wrong with this idea in complete moderation, objectivity and independent monitoring but what I’m struggling with is does PressTV not like blood? Does it not like brutal images? What about upsetting images? No;

Could it be that PressTV is censoring pictures based on their political weight? It seems, this Iranian news agency suffers from factual inaccuracies as well. Some examples are above, others include the fact that it “claims that the Lebanese government is trying to convert the Nahr al-Bared Palestinian refugee camp into an American military base, but provides no evidence to back up this allegation.” Another inaccuracy in an article (which has so many that I may have to make a separate post about it) is typical of PressTV’s outlook;

Although they had agreed to put the rest of Palestineunder an undefined international administration, Britaindecided to conquer the area and in late 1917 their soldiers laid foot on the lands of our beloved al-Quds —which they now call Jerusalem.

Yes, the “now” call it Jerusalem. It’s not like it dates back before 1917. Its not like Jerusalem outdates “al-Quds”. Well, according to PressTV. I’ve tried to make this post thematic: headlines, conspiracies, pictures and inaccuracies. The final part is the people. The people who make and work for PressTV.

George Galloway – I don’t really need to say much, rather just quote Ofcom;

In the programme, George Galloway variously labelled Israel as committing:

Is it any wonder that Nick Ferrari left because of the bias (admittedly, just the post-election coverage according to him)? Is it any wonder that Larry Gillick claims that PressTV “burned him” and misconstrued what he said? Ali Ansari, an authority on Iranian history and politics, appeared on a “debate” about the Iranian elections and in it, the camera frequently cuts off. Indeed, Ali Ansari himself said “They will have very likely edited it”

The articles which refer to Israelis and “The New Nazis,”and that affix “oil-rich” to Iraq in its discussions about the US/UK invasion/occupation will probably never stop. The asking of its readers “When will Israel collapse?” probably wont either. (The results were “Over 50 percent of the 2255 respondents to a Press TV online poll are of the belief that after 60 years of the establishment of Israel, the regime’s power is nearing collapse”) It will continue to take weeks worth of articles down when it suits its purpose.

But what we can be sure of is this;