The rightwing blogosphere/media nexus has leaped on a report by a blogger called theblogprof (see Updates #3 through #14) that a sign featuring Barack Obama with a Hitler mustache, which appeared at a town hall meeting held by Michigan Democratic Congressman John Dingell, was in fact carried by “union thugs” and supporters of Dingell. 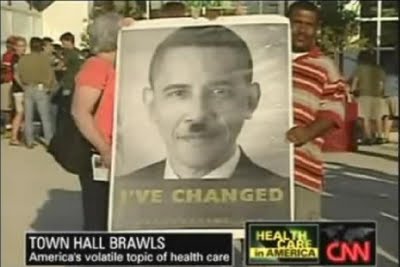 Last Friday, Frank Beckmann on his show broadcast on WJR 760 AM interviewed an eyewitness that said not only were union thugs let in through a side door before anyone else was let into the venue, but that he clearly saw from his vantage point that very Obama as Hitler poster in that back hallway after the union thugs took their seats.

Let’s leave aside the question of how the eyewitness distinguished “union thugs” from non-thuggish union members and non-union thugs, or the probability that the eyewitness assumes that all union activists are by definition thugs. Is this one report from an obviously biased source all the evidence theblogprof has?

What we do have is strong evidence that the sign carriers are members of the bizarre Lyndon LaRouche cult– a fact made plain by this video which appears in theblogprof’s own post, and by this item on The New Republic’s blog The Treatment, which links to a report on a LaRouche website:

In Romulus, Mich.,… 1,000 citizens turned out to confront the formerly popular Rep. John Dingell (D), who has served in the House since 1955. When LaRouche PAC organizers held up a large poster, depicting President Obama with a Hitler moustache, and the words “I’ve Changed,” the crowd went wild with approval, taking pictures and videos, and backing down police, who attempted to escort the organizers outside the room where the event was being held…

It’s hard to classify LaRouche as a rightwing nut or a leftwing nut– he’s just a megalomaniac nut, and an antisemitic one at that. He has absolutely no connection to the Democratic party or organized labor– quite the contrary, they regard him as poisonous. (LaRouche has run for president in some Democratic primaries– there’s no law preventing him from doing so– but he never gets more than a handful of votes.)

After LaRouche was invited to address the National Press Club in 1986, for example, The Los Angeles Times reported:

Some LaRouche critics had mixed feelings about his being invited to address the… Club.

“I don’t like to see him get such a prestigious platform,” said Terry Michael, a spokesman for the Democratic National Committee. “At the same time, I realize every time he opens his mouth, people see how off the wall he is.”

“I don’t think LaRouche can stand exposure,” said Murray Seeger, an AFL-CIO spokesman. “He and his members are like bugs under a rock. You turn over the rock and the bugs disappear or die.”

So unless I see more convincing evidence, I’m going to have to reject theblogprof’s sensational claim that the “Obama as Hitler” poster was a “A Democrat/Union Plant.”