A couple of reminders that the election of an African-American as president last year, though of enormous symbolic importance, did not automatically turn the United States into a post-racial society.

A swastika was found Tuesday painted on a sign outside Rep. David Scott’s district office, an act the Georgia Democrat said reflects an increasingly hateful and racist debate over health care and should serve as a reminder for people to tone down their rhetoric. 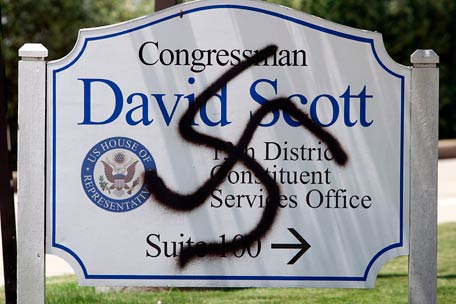 Scott’s staff arrived at his Smyrna, Ga., office Tuesday morning to find the Nazi graffiti emblazoned on a sign bearing the lawmaker’s name. The vandalism occurred roughly a week after Scott was involved in a contentious argument over health care at a community meeting.

Scott, who is black, said he also has received mail in recent days that used N-word references to him, and that characterized President Barack Obama as a Marxist.

“We have got to make sure that the symbol of the swastika does not win, that the racial hatred that’s bubbling up does not win this debate,” Scott said in a telephone interview. “There’s so much hatred out there for President (Barack) Obama.”

A moderate Democrat who represents a majority-white district near Atlanta, Scott said he thinks the racism is isolated but can’t be ignored. He said the swastika probably was intended as a warning. He hopes it instead persuades reasonable people to maintain a more substantive debate over health care changes.

The fact the Scott represents a majority-white district in Georgia suggests that he’s anything but a race-baiting hothead.

Second, there are fascinating results from two polls on the state-level prevalence of the belief that President Obama is not a US citizen.

The difference is especially remarkable when you consider that Utah is one of the most reliably “red” states in the country, voting for John McCain over Obama last year by 62 to 34 percent.

If anyone has a better explanation, I’d be interested.