As Caracas Chronicles wrote, “The ‘media crimes’ that the esteemed Prosecutor General wants to make punishable with jail are expressed in terms vague enough to be essentially boundless”– they would include any media report that disturbs “social peace,” “mental health” or “public morals,” or “destabilizes the State’s institutions.”

In case there was any doubt about her intentions, Ortega declared, “Freedom of expression must be limited.”

A pro-Chavez website has dutifully defended the indefensible, claiming that Ortega was simply presenting a series of ideas for discussion on how to combat the “media dictatorship” and “media terrorism.” Andy Newman at Socialist Unity is among those willing to swallow that line. He writes:

The Venezuelan government is therefore seeking a mature debate about how to deal with the problem of “media terrorism”, where TV, radio and newspapers maliciously disseminate information that they know to be false in order to destabilise the government, or discredit individuals.

However when Ortega presented the “ideas” to the National Assembly with an assertion that “it is necessary to legislate on this matter,” it became hard to grasp the distinction.

Chavistas aren’t the only ones abusing the term “terrorism” in relation to media they don’t like. Discussing a silly assertion by the Washington Post’s Stephen Pearlstein that rowdy protesters at town hall meetings on health care are “political terrorists,” Jim Pinkerton of the New America Foundation said on Fox News, “The real terrorism going on is MSNBC and the liberal media.”

Wrong again. This is terrorism: 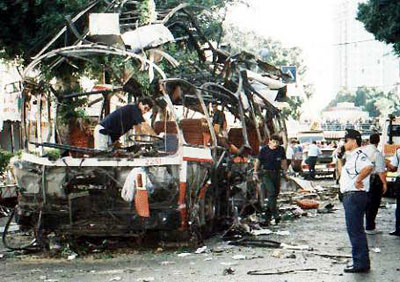 Update: It seems Ortega’s bill was too much even for the chavista-controlled National Assembly.