David Aaronovitch turns his attention to the outbreak of bizarre behaviour that is presently scarring the face of the U.S. Right. Here’s a snippet:

One recent viral YouTube video shows a town hall meeting on health in Delaware in which the veteran Republican Mike Castle is being yelled at by an apparently insane woman flourishing a birth certificate in a plastic bag, and demanding (1) that Mr Obama produce his, and (2) that everyone present recite the Pledge of Allegiance. Which, amazingly, instead of calling for an ambulance, they do.

The video that David is describing can be viewed below:

The meeting at which this event took place was a Town Hall meeting, called by the Republican Congressman in order to discuss healthcare reform. So, obviously, the perfect opportunity to wave around your own birth certificate while ranting about your belief that the President is a Kenyan.

Now, having read Gene’s thread below, I know that some of you will be watching the video and thinking: “well, what’s wrong with that”. Some of you will also be inclined to lay in to Mike Castle. Others will, no doubt, use the open forum that Harry’s Place offers to ramble about birth certificates.

Let me take a step back and let you have some perspective on how this plays outside the constituency of Glenn Beck and Rush Limbaugh fans.

Perhaps this is how you see these ‘spontaneous’ protests: 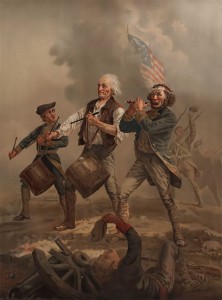 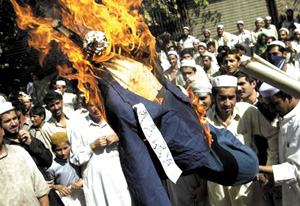 Believe me, we’ve been here in the U.K. This is pretty much the sort of lunacy that we saw in the Labour Party during 19 long years of opposition, the low point of which was the 1983 election: in which Labour sought to return to No. 10 on a platform of unilateral disarmament that was premised upon the mistaken notion that the U.S.S.R. was a benign entity with only pacific ambitions.  I suspect we’re going to see a little bit of this again, after next year’s election. I’m braced for it.

The thing is: moderate Republicans should NEVER have allowed their party to get to the state it is in now. I don’t know how they did.

What does this make me think about the U.S. Right?

Well, if a moderate Republican like Mike Castle – a descendant of Benjamin Franklin – is treated like this, it makes me think that the party is in a shambles, has no ability to control its base, and is unelectable.

Alternatively – and this is worse – the Republican leadership actually believes that rattling on about birth certificates, combined with a platform of creationism and gay bashing is an electoral winner. What that means is that there is no home for moderates (i.e. non mad people) in the Republican Party.

Parties win elections when they define the mainstream, and then occupy it. If the Republican Party genuinely believes that a citizens’ army of wild eyed Pledge of Allegiance chanters will ever represent the centre ground, they’re lost.