Vice magazine has part one of an extensive and rather droll article about the cross dressing Messiah, David Shayler, up at their site. 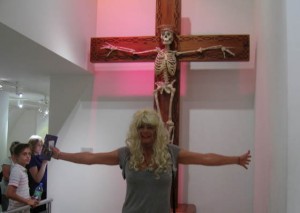 When we last wrote about Shayler, there was some concern that he might be mentally ill. That is possible. However, if you’ve hung around with stoners for any period of time, you will be very familiar with the sort of weed-fuelled ramblings that are now Shayler’s stock in trade.

The signs – a typical conspiracist’s stew of Kaballah, Biblical end-times, and stuff he’s copped from Dan Brown novels – will be naggingly familiar to anyone who’s ever opened The Bible Code, a David Icke book, or any one of dozens of green-inked pamphlets of its ilk.

Shayler’s currently sitting inside a squat in Abinger, Surrey. He lives here these days, smoking dope and trading rants with his teenage squat buddies. Beyond this psychedelic threshold however, he’s a fast-rising figure in the world of paranoid saviours, and he’s been inducted into David Icke’s pentagram of acquaintance. “I think of him as John the Baptist to my Jesus Christ.” But there’s a certain niggling rivalry in there too. “I think a lot of what David says has value. But he concentrates too much on the negative. He can tell you what’s wrong with the world. He can’t tell you much about how to put it right.”
And you also diverge on the key policy area of a super race of lizards who run the world?

“Yes. But I definitely believe in the Zionist conspiracy.”

From what he goes on to describe, the Zionist conspiracy sounds very serious indeed – the world turned chessboard by a cabal of sinister oligarchs, who cause wars and rattle their sabres for capitalism while keeping the populace in check with bread, circuses, and the need to make regular mortgage payments.

Much this is thematically familiar to me – it is the sort of crap that people who do nothing but smoke a lot of cannabis like to say. In terms of etiquette, the correct response is to adopt a glassy stare and nod, before asking:

“I’m sorry – what were you talking about? I’ve lost your chain of thought”

Obviously, the World Wide Zionist Conspiracy stuff wasn’t quite so popular a component of stoner rubbish when I was a kid. Back then it was bar codes, and a government created disease called “hippy flu”, which made you listless, demotivated and confused, and was a secret tool in the State’s campaign to keep us all from questioning authority.

Somehow, somewhere along the way, it seems that hippies have started to get paranoid about Jews.