This is from Shikwa of The Spittoon 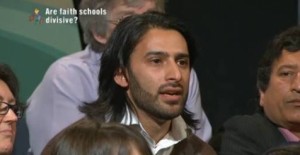 He’s a busy boy in his hometown of Rochdale these days – what with trying to create a Caliphate and all that, it’s remarkable he has time for anything else. But he does. By night Majed moonlights as a journalist, trying to pass off his wildly racist views as dispassionate and objective reporting.

Now then, he doesn’t exactly write for a major broadsheet (or, dare I say, a weekly political magazine) but instead peddles his nonsense in the ‘Asian Leader’ newspaper in Rochdale. Does it really matter then? I think it does.

Rochdale has a large Muslim population and is one of the areas where the government is concerned about the spread of radical Islamism. Majed is effectively being allowed to spread his message there under the guise of an impartial journalism.

For example, the Spittoon first revealed how Hizb ut Tahrir is waging a campaign (known as the SRE Islamic Campaign) against the teaching of sex and relationship education in schools. Majed is an active member of that campaign in Rochdale. Naturally, he also wrote about it for the Asian Leader under the headline: “Muslim community says NO to sex education for five year olds”. He writes:

Yusuf Patel and Farhad Khodabaksh, both Muslim activists from London, initiated a campaign against the government proposals after coming across information on plans to begin teaching Sex and relationship education to five year old primary school children in October last year. 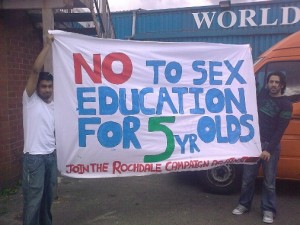 Majed Iqbal, on the right, running the SRE campaign in Rochdale

Majed is even kind enough to give us a link to their website and tell us about upcoming ‘SRE Islamic’ events. What he omits to tell his reads is that both Patel and Khodabaksh are members of Hizb ut Tahrir – and, so is he. Instead he happily paints a picture of a monolithic Muslim community all marching along in unison to the beat of HuT’s Islamist agenda.

In another article he propagates the usual HuT rubbish about democracy being doomed to failure, presenting democracy and dictatorship as being ‘two sides of the same coin’. He writes:

Both Democracy and Dictatorship have wreaked havoc for Pakistan.

Those parties that [have] questioned Dictatorship and contested it under Musharraf’s rule, are they now willing to challenge democracy and ask for its removal after witnessing its fruits?

But what’s the alternative Majed? Won’t you please tell us?

His tawdry website is littered with countless more examples of standard HuT agitprop. In another article Majed attacks Imam Irfan Chisti, a local Sufi cleric who works on PVE initiatives with the government. After Chisti told Hazel Blears of his concerns about the rise of extremism in Rochdale, Majed lambasted him in the pages of ‘Asian Image’ writing:

Imam Irfan Chisti’s report plays perfectly into the hands of the government agenda of validating the need for Citizenship courses which are an attempt to create a new version of Islam where a Muslim is silent on international affairs, pacifist with freedom of speech and divorces Islam to personal affairs only like diet and worships.

At the end of the piece Majed described himself as:

a writer and commentator based in Rochdale.

Again, no mention of his HuT membership.

The issue is clear. Can you imagine the uproar if members of the BNP were given space to propagate their views in local community newspapers? And, even if they were given the occasional comment piece, we would expect the author’s membership of a racist outfit to be clearly flagged up for the benefit of readers. None of that has happened with Majed who is simply allowed to tout himself as an independent commentator on events.

Don’t think it’s that bad? Well, just consider that when Pervez Musharraf declared a state of emergency in Pakistan a few years ago who did Sky News go to for comment? Yup, there was Majed speaking away from Rochdale telling everyone how much the people of Pakistan ‘yearned for a return to Islam’! He obviously missed the recent election results from Pakistan’s most conservative region, the NWFP, where all the Islamist parties were utterly obliterated at the polls in favour of their secular counterparts.

The whole issue reminds me of the Dilpazier Aslam fiasco when the Guardian employed him. Ok, that was a bigger paper with national reach – but if Press TV and the Islam Channel have taught us anything, it is that we should not underestimate the power of community media targeting minority audiences.

I wrote to the ‘Asian Leader’ asking three simple questions about this matter:

1. Was the newspaper aware of Majed’s membership of Hizb ut Tahrir?

2. If so, why did it not alert readers of his column to this?

3. If the paper did not know, what steps will be taken to rectify this in the future?

Those are natural questions and you’d imagine the paper would be rushing to clarify the situation. Alas, so far nothing but radio silence.

Baffled by this lack of contact I decided to do some research into the ‘Asian Leader’ and discovered that it had recently been sued by former Rochdale MP, Lorna Fitzsimons. The Manchester Evening News explains:

Ms Fitzsimons sued for libel over a front-page article in the Asian Leader in November. Her photograph appeared alongside the Star of David and the headline: “Is she a star liar?”

Aah, maybe that explains it then.