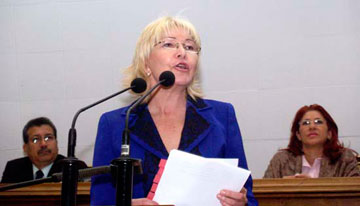 Looks like the Chavez regime didn’t even bother to come up with a euphemistic, non-threatening name for its latest act of repression.

The new law would punish the owners of radio stations, television channels and newspapers that have attempted to “cause panic” and “disturb social peace,” Attorney General Luisa Ortega said.

It also would punish media owners who “manipulate the news with the purpose of transmitting a false perception of the facts.”

“Freedom of expression must be limited,” Ortega said.

Ortega urged lawmakers to consider her suggestions as they debate a bill that would punish as-yet-undefined “media crimes.” The National Assembly, which is controlled by allies of President Hugo Chavez, is expected to approve the measure in coming months.

Jose Miguel Vivanco, Americas director for Human Rights Watch, warned the proposed legislation “would be a terrible regression for freedom of expression.”

“They are trying to increase the penalties for expressions that could be considered offensive for authorities,” Vivanco said in an interview broadcast by RCN Radio in Colombia.

Carlos Lauria of the New York-based Committee to Protect Journalists called the bill “reminiscent of the dark days of Latin American dictatorships with its archaic provisions for so-called media crimes.”

Juan Cristóbal and Quico at Caracas Chronicles, who have been critical of the opposition media in Venezuela, write:

The brazenness and scope of her speech is chilling. The “media crimes” that the esteemed Prosecutor General wants to make punishable with jail are expressed in terms vague enough to be essentially boundless.

For Ortega Diaz, journalists should be criminally liable not just for what they write, but also for the perceptions that the things they write create in their readers. Anyone who uses the mass media to communicate something that disturbs “social peace,” “mental health” or “public morals” can end up in jail. Her bill calls for the incarceration of anyone who, through their use of mass media, “destabilizes the State’s institutions.” Anyone who broadcasts anything that may cause “hatred and hostility” toward people based on, among other things, their “ideology or political affiliation” will end up in the slammer.

Standards like those are vague enough to be replaceable by a single word: everything. Every single thing a journalist writes is bound to lead someone somewhere to create a perception different from the one Luisa Ortega Diaz thinks is right. Every single opinion a blogger writes that may cause someone out there to hate a specific politician will make us criminal in the eyes of this deranged fanatic.

(Woooops…we just called her a “deranged fanatic”…that’s two to four years in jail for us!)

In effect, Luisa Ortega Díaz’s bill would outlaw free speech in Venezuela, plain and simple. Her proposal constitutes the most brazen authoritarian leap this country has seen since the days of Pedro Estrada [the notorious chief of the secret police for Venezuelan dictator Marcos Pérez Jiménez].

Expect a defense of the indefensible to appear in the comments.

At least 34 private radio stations in Venezuela were closed indefinitely Friday, and 206 more were at risk of being shut down, a government official said.

The stations were closed for various reasons, including expired permits and operation by unauthorized personnel, said Diosdado Cabello, minister of Public Works and Housing.

“Freedom of expression is not the most sacred freedom,” Cabello was quoted as saying by CNN affiliate Globovision.

Cabello said the closings affected at least 11 states nationwide and 206 additional stations would shut down in the coming days.

Most station owners said the closures were politically motivated. The government of leftist President Hugo Chavez has cracked down on the media.