In between media coverage of the Henry Louis Gates arrest brouhaha and the Michael Jackson death investigation and the latest incarnation of the “birther” nonsense, there were reports about an event worthy of notice in the richest and most powerful country in the world.

Thousands of people turned out to receive free medical and dental care at the Wise County Fairgrounds in rural southwest Virginia. 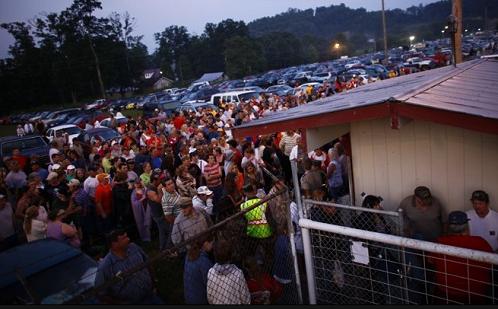 Some had arrived… two days before. They slept in cars, tents and the beds of pickup trucks, hoping to be among the first in line when the gate opened Friday before dawn. They drove in from 16 states, anxious to relieve pain, diagnose aches and see and hear better.
…..
For the past 10 years, during late weekends in July, the fairgrounds in Wise have been transformed into a mobile and makeshift field hospital providing free care for those in need. Sanitized horse stalls become draped examination rooms. A poultry barn is fixed with optometry equipment. And a vast, open-air pavilion is crammed with dozens of portable dental chairs and lamps.

Most of those treated (like tens of millions of Americans) had no health insurance, or were underinsured. Providing the care were volunteers from the Remote Area Medical (RAM) Expedition, which offers treatment to underserved populations across the US. Tellingly, RAM also sends expeditions to places like Guyana, Dominican Republic, Haiti, Honduras, Guatemala and East Africa.

Making health care affordable and available to all Americans, and not just on a once-a-year basis, is at the top of President Obama’s political agenda– as well it should be.

For me, the issue comes down to this: either you believe that decent health care is a basic human right, and not just a privilege for those who can afford it– or you don’t. If you do, then you have to recognize that the current system is failing far too many people, and needs to be changed. (I favor a single-payer Canadian-style system, but that’s not on the table.)

If that’s not good enough for you, consider the pro-business and national security case for universal health care.

Last month I had surgery for two herniated discs in my neck, which were making my life miserable. It involved the partial removal of the discs, replaced by bone marrow extracted from my pelvis, as well as the placement of two metal plates in my spine. (See an animated version here.) This required an overnight hospital stay. The billed charges from the hospital were $18,047 and the billed charges from the surgeon were $33,360. Fortunately I can afford to self-pay for insurance, so my out-of-pocket cost was only about $800. But the surgery worked, and I feel I can get on with my life now.

The thought that there are at least hundreds of thousands of other Americans who are suffering pain as bad or worse than mine, which could be relieved by surgery that they can’t afford, is to me a source of shame.