The CST’s report on antisemitic discourse has been published. It is a characteristically crystal clear analysis, and a depressing one at that:

Often, the antisemitic discourse covered in this report reveals unthinking stereotypes and prejudice, rather than something more considered. Lazy journalism can lead to what David Hirsh called “ready-made ways of thinking about Jews”. Some of the UK media coverage of the American presidential election, which is included in the report, falls into this category. Other examples in the report, such as Press TV’s promotion of Holocaust Denial, are more sinister; still others, such as Alan Hart claiming that Jews live in communities so that they can form voting blocs (rather than, for example, wanting to live within walking distance of their synagogue), are bizarre. Often, it is only by revisiting what antisemites used to say openly… that the antisemitic resonance of contemporary discourse can be fully understood.

One continuing problem is the way that extremist and racist ideas find easy platforms on mainstream media websites, blogs and forums. There is no simple answer to this, but one needs to be found. The first step is to identify and map the problem, and we hope that CST’s report adds to this effort.

The analysis of Alan Hart’s output (p. 35) it particularly good, as it demonstrates how even a man like Hart who – as he is at pains to stress – is very fond of Jews indeed, can appear to be echoing antisemitic themes.

There is also a good account of the Delich affair, when a UCU member posted antisemitic and conspiracist material from far Right websites to a union list, and was defended by various far Left activists (one of whom took Harry’s Place down for 48 hours in retaliation for our reporting of this business). 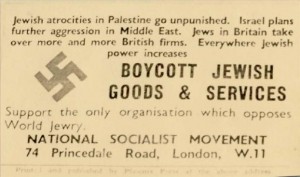 The National Socialist Movement was where a young Andrew Brons (now a BNP MEP) started his political career, alongside BNP founder John Tyndall (on the left in this picture).