Forty years after their breathtaking mission to the moon, the Apollo 11 astronauts are calling on the US government to make Mars the next extra-terrestrial destination for human beings.

But if I may be permitted a possibly heretical question: Why?

I think Bob Park, a University of Maryland physicist, makes a good argument in his weekly email newsletter for why not:

This is the 21st century. Telerobots have been invented. Our two Mars rovers, Spirit and Opportunity, are merely robust extensions of our fragile human bodies. They don’t break for lunch or complain about the cold nights, and they live on sunshine. They do suffer the afflictions of age. Their teeth are worn down from scraping rocks, and one has an arthritic foot that he drags behind him. But their brains are still sharp since they are the brains of their PhD handlers. No need to bring them home when they are no longer able to explore, they will just be turned off. [NASA administrator Charles] Bolden also said he wants to go to Mars. How incredibly old-fashioned! We are on Mars now. We have been on Mars for more than five years, looking for evidence of water and life. A human on Mars would be locked in a spacesuit with only the sense of sight. Our rovers have better eyes than any human, and we don’t have to take their word it; everyone can see what they see. How wonderfully democratic! Moreover, they have the IQ of their PhD operators back on Earth. 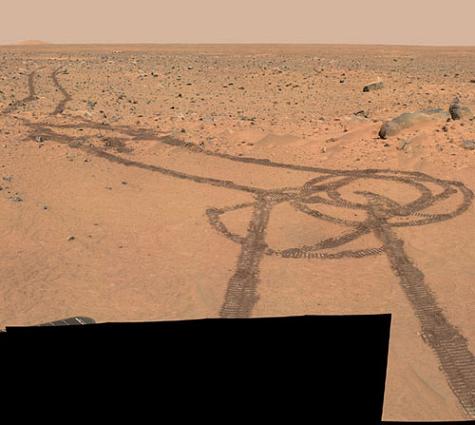 So, scientifically speaking, is there anything useful a human being could do on Mars that a robot can’t (or couldn’t)? Is it really worth the enormous expense and great risk to human life simply to have the bragging rights? Is it a failure of imagination to appreciate just how astounding the achievements of unmanned probes to Mars and beyond have been and will continue to be?

The Song of the Party