I stumbled upon this article in the New Statesman (via Islamophobia-Watch, which enthusiastically endorses it).  Here, here’s a screen grab so you can see I’m not making this up: 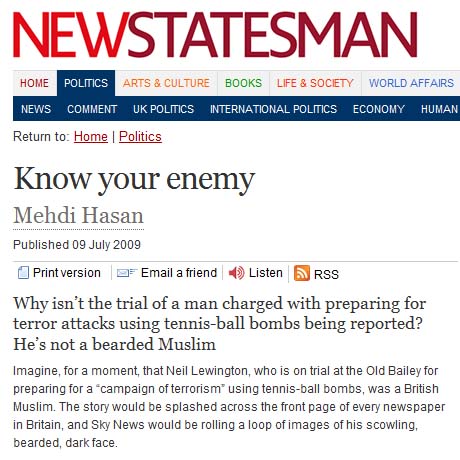 Okay, here’s the text of his intro:

Why isn’t the trial of a man charged with preparing for terror attacks using tennis-ball bombs being reported? He’s not a bearded Muslim.

Imagine, for a moment, that Neil Lewington, who is on trial at the Old Bailey for preparing for a “campaign of terrorism” using tennis-ball bombs, was a British Muslim. The story would be splashed across the front page of every newspaper in Britain, and Sky News would be rolling a loop of images of his scowling, bearded, dark face.

The reality, however, is that you’ve probably never heard of Lewington (who denies all eight charges of terrorism) because he is not Muslim, or black, or of Asian origin. He is white. And our gloriously impartial, truth-seeking, “colour-blind” media don’t seem to care. The coverage of the Lewington trial has been negligible – a few short stories buried deep inside a handful of newspapers, but, as I write, no rolling coverage on Sky News, and not a peep on the main BBC news bulletins or on Newsnight.

So off I went to Google News to see what everyone was reporting if they were ignoring this story. But too my surprise, it was the ‘Top Story” on Google News, with headlines from The Times, The Telegraph, BBC News, Reuters, The Sun, and 239 other news sources.

The NS journalist, Mehdi Hasan, claims that coverage has been “negligible”, but I did a Google News search for “Neil Lewington” and it returns over three hundred stories.

Hasan sneers rhetorically that, where Lewington a Muslim, we’d see his “scowling face” splashed across the papers. Apparently we don’t, so the collage below must be an hallucination… 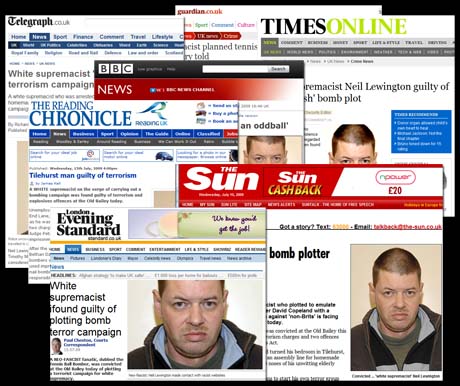 He singles out Sky News for some reason. He says “no rolling coverage on Sky News”. Oops! What’s the lead story on their news ticker? You guessed it: 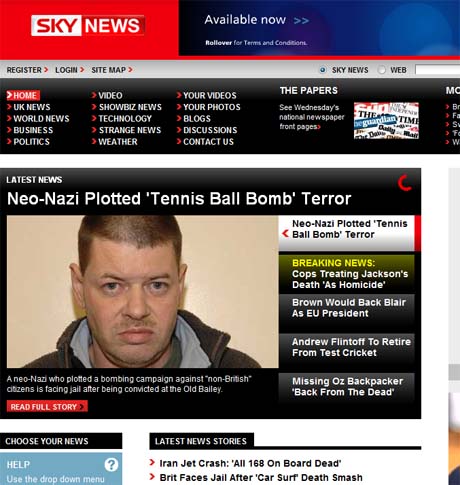 Oh, by the way, “Mehdi Hasan is the New Statesman’s senior editor (politics)”. So this is the chap that replaced Martin Bright? Pathetic. Hasan is clearly a cheap propagandist and grievance-monger.

I notice that Hasan doesn’t appear to be rushing to commission an op-ed piece on the “root-causes” of far-right racist terror. Of course you’ll be told that the “root cause” of neo-nazi terror is neo-nazi ideology. That is precisely right. Funny how simple it can be when you want it to be.