This is a guest post by Barbara Suzuki and is cross-posted from HOPE not Hate, Norfolk:

Three Hope not hate campaigners went to meet the fake Reverend Robert West in Norwich today. The three campaigners approached Robert West and asked him to explain where he got the right to use the title “Reverend”. The BNP activists, who were rallying in a car park at a closed pub, The Duke of Norfolk on Mousehold Lane, were surprised and angry that Hope not hate were there to greet them.

The BNP asked for volunteers to come to Norwich today. Only about twenty actually turned up, and it seemed their idea of a day of action was to attack local Hope not Hate campaigners.

Robert West, who as well as believing himself to be a Vicar, also now appears to believe that he is Winston Churchill, held out the V for victory sign. 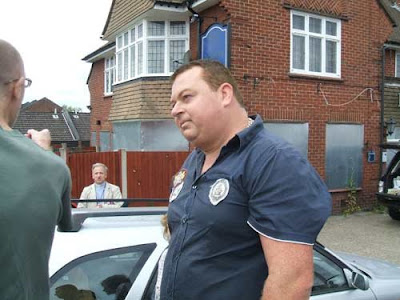 During the kerfuffle, West, obviously fearing that his minder was out of control, contacted the police along with another BNP member.

Within two minutes, three police units had arrived at the public house, having been told that public order was under threat. They were somewhat surprised to see that the only casualty was a Hope not hate campaigner with a bad cut to his hand where he had been attacked by the minder. The police were not surprised to hear that the three Hope not Hate campaigners were the victim of the attack rather than the perpetrators, given that they were outnumbered by approximately 7 to 1, and they were the only people with injuries.

After making enquiries, the police offered the Hope not Hate campaigner the opportunity to press charges for assault but we declined in order not to further waste police time.

The campaigners expected the BNP to set off leafleting after the police informed them that we were not pressing charges, but they stayed for another hour in the pub car park, obviously waiting for someone to arrive. The BNP were extremely anxious for Hope not hate not to meet their VIP as they set off in dummy decoys on several occasions before sheepishly coming back to the pub car park.

Who were they waiting for? Well if national BNP figures are too afraid to meet three local Hope not hate campaigners armed only with a few Nick Griffin quotes, then perhaps they really are worried about how the public sees them.

After the initial assault by the BNP minder, the rest of the BNP declined the chance to talk to Hope not hate for over an hour, preferring to stay corralled in the pub car park. One BNP activist, apparently a BNP county council candidate for Kings Lynn, did venture over to say that she was sorry about the assault but that the BNP minder was a “working class man from a poor council estate who didn’t know any better. . .”

The BNP seemed to believe that even talking to Hope not hate would contaminate their minds with truth and honesty.

What the electors of Norwich will make of the BNP attacking a Christian Hope not hate campaigner who asked the fake Reverend to explain his title will have to be seen.