Readers of Harry’s Place are invited to observe – via this charming photograph taken on the last day of Marxism 2009 – a rarely-glimpsed ritual still practiced by many members of a tribe (Trotus Vulgaris) once common on Britain’s High Streets: namely the tuneless bellowing of the tonge-twisting anthem – ‘The Internationale’ – at the end of their traditional annual gathering.

Sadly reported sightings of this colourful yet socially awkward tribe have been decreasing at a dramatic rate over recent years. Observers – as is so often the case – are divided when positing possible explanations for such an alarming shrinkage in population levels. One influential current of opinion claims that their glacial rate of reproduction is to blame, citing the tribes’ lack of social skills as a contributing factor, others have posited that a more aggressive group (Jihadus Militis) competing for scarce resources have supplanted the less intellectually nimble and slower-moving Trots.

Whatever the reason we should enjoy such glimpses of this fascinating and ancient tribe whenever they are presented to us. After all, they may not be with us for much longer. 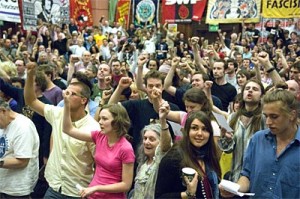 Female Visual Design  student with dark hair on the right of the picture: *thinks* The photographer’s going to need the biggest wide-angle lens ever invented to make it look like there are more than a few dozen of us in this damn place. And a filter’s going to come in useful if he wants to compensate for the lowest levels of melanin I’ve seen this side of the General Assembly of the Free Kirk…

Surfing Studies Graduate next to her: E’er the thieves will out with their booty…And to all give a happier lot…Each at his forge must do their duty…and we’ll strike the iron while it’s hot!