Many thanks to the British bloggers who have passed on the message about tomorrow’s Green Thursday demonstration of solidarity with the Iranian people.

Its another big day tomorrow. The 10th anniversary of the student uprising in Iran. The student protests in 1999 spread to 19 cities and went on for 6 days. The uprising was brutally crushed but it was the beginning of a new dawn. It gave us hope that change was coming to Iran. That despite all the propaganda machinery of those who consider themselves the ‘Representatives of God on earth’, the young Iranians had not been duped, and they had not given up. They were as determined as ever to bring about the 100 year old struggle of the Iranian people for democracy and freedom of speech to fruition.

‘Freedom of Thought, Forever, Forever’ Was the main slogan of those youngsters who had risked their lives by joining the protests in 1999. Ten years on now, the struggle is much more widespread. Now its every section of the Iranian population. The people of Iran deserves your international support.

Come and join us outside the Islamic Republic embassy in London, tomorrow 9th July, in London after 5:30 pm. Let the forces of darkness know that the freedom loving people of Iran are not on their own.

Victory to the freedom loving people of Iran.

Help them enjoy the same freedoms you enjoy. 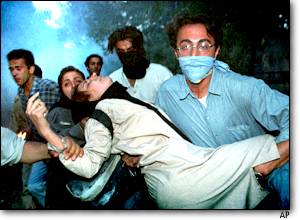 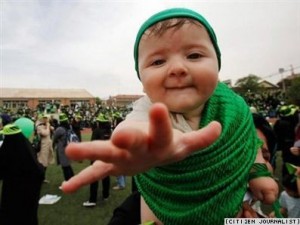 As far as I know, Hossein Rassam, a local employee of the British embassy in Tehran, is still in custody in Iran, facing spurious charges of endangering Iranian security. This is one of the lowest and nastiest of blows the regime could deal the UK.

Hossein Rassam works for you. He should be free.

So should so many other Iranians who only want what you already have. Instead they are in Evin prison, or worse.