The first relates to the killing of Marwa Al Sherbini in Germany:

The second relates to the unrest in Xinjiang:

While reports suggest protests began peacefully, we strongly condemn all forms of violence occurring in Urumqi at the hands of both protestors and police. Nevertheless, we are worried the Chinese government will take this opportunity to severely crackdown on the Uighur community, who are already amongst the most repressed peoples of the world. We are also very concerned over the wide report of 140 dead, and even more worrying are other Uighur sources reporting a much larger figure. It is believed that a large number of Uighurs have died in the violence.

We were beginning to worry about Massoud Shadjareh. We’ve heard nothing from the IHRC since the middle of last month when they issued anurgent appeal to write letters of support to a Black Panther murderer called H Rap Brown who might have been deprived of his Quran by prison authorities.

But we need worry no longer.

The reason for the IHRC’s silence is this. For the past month, the news has been dominated by the story of the struggle of the Iranian people for democracy and freedom, against the pernicious and theocratic Ayatollocracy that rules them. 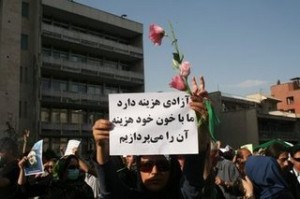 “Freedom has a price. We pay the price with our blood”

The IHRC is not, as it falsely claims, a organisation concerned with the abuse of human rights in Muslim majority countries. Rather, it is a Jew-fixated Khomeinist cheerleading outfit, directly linked to the Islamic Republic of Iran.

So, of course, it still has nothing to say about the millions of Iranians striving for freedom from tyranny.