I do not support any attack on Iran by any country.

I also would not want to be an Israeli or Arab official weighing the merits of that view. What if Iran gets the bomb? You know, Iran?

There are of course ways to frustrate Iran’s progress, such as diplomatic pressure on Iran itself and its supporters, targeted technical sanctions, and subterfuge in the nuclear project’s international supply chain.

But things are not going well on the diplomacy and sanctions front, according to the US government, and I doubt that government is entirely alone in its assessment, no matter how widely public statements of other countries may vary.

So let’s say all the efforts underway fail and Iran does get the bomb. Hotheads may still call for an attack. Others will opt for a proven solution, which is deterrence.

Well, hello boys, meet the Dolphin. Are her cruise missiles just conventional? Or are they nuclear bombs? What, exactly, is the range of the missiles? Have fun! 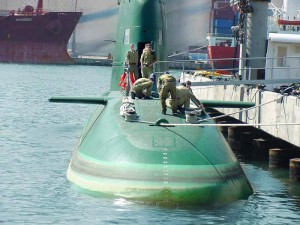 Here (oh hello Cairo!), have some more fun, with a Reuters report:

JERUSALEM (Reuters) – An Israeli submarine sailed the Suez Canal to the Red Sea as part of a naval drill last month, defense sources said on Friday, describing the unusual maneuver as a show of strategic reach in the face of Iran.

Israel long kept its three Dolphin-class submarines, which are widely assumed to carry nuclear missiles, away from Suez so as not to expose them to the gaze of Egyptian harbormasters.
…
Sailing to the Gulf without using Suez would oblige the diesel-fueled Israeli submarines, normally based in the Mediterranean, to circumnavigate Africa — a weeks-long voyage. That would have limited use in signaling Israel’s readiness to retaliate should it ever come under an Iranian nuclear attack.

Shorter-term, the submarines’ conventional missiles could also be deployed in any Israeli strikes on Iran’s atomic sites, which Tehran insists have only civilian energy purposes.

A defense source said the Israeli navy held an exercise off Eilat last month and that a Dolphin took part, having traveled to the Red Sea port though Suez. Israel has a naval base at Eilat, a 10-km (6-mile) strip of coast between Egypt and Jordan, but officials say it has no submarine dock there.

“This was definitely a departure from policy,” said the source, who declined to give further details on the drill or say whether the Dolphin had undergone Egyptian inspections in the canal, through which the submarine sailed unsubmerged.
…
Egyptian officials at Suez said they would neither confirm nor deny reports regarding military movements. One official said that if there was such a passage by Israelis in the canal, it would not be problematic as Egypt and Israel are not at war.

Lunatic communists in Russia long believed that their brutal system, theoretically bent on global domination, and practically at it anywhere they had a chance of a conventional advance, never mind the deaths in the thousands or millions, was best for humanity. Mao was no better, if more modest in his geographic ambitions.

Yet they did not launch.

Nor have India or Pakistan, and that relationship is, well, fraught, in religious ways, among others.

Lunatics need some clever types to retain their grip on power. I’m sure Tehran has some who will get the significance of the Suez canal message.

With any luck the clever will be in power in Tehran and making peace with Israel by the end of the year.

That’s not likely, though, by the look of things today. Not at all.

Do take care, Mahmoud and Co.