Bernie Ecclestone is in the news today:

Bernie Ecclestone, the Formula One chief, said yesterday that he preferred totalitarian regimes to democracies and praised Adolf Hitler for his ability to “get things done”.

In an outspoken interview with The Times, the 78-year-old billionaire chastised contemporary politicians for their weakness and extolled the virtues of strong leadership.

Mr Ecclestone said: “In a lot of ways, terrible to say this I suppose, but apart from the fact that Hitler got taken away and persuaded to do things that I have no idea whether he wanted to do or not, he was in the way that he could command a lot of people, able to get things done.

“In the end he got lost, so he wasn’t a very good dictator because either he had all these things and knew what was going on and insisted, or he just went along with it . . . so either way he wasn’t a dictator.” He also rounded on democracy, claiming that “it hasn’t done a lot of good for many countries — including this one [Britain]”.
Instead, Mr Ecclestone endorsed the concept of a government based on tyranny.

“Politicians are too worried about elections,” he said. “We did a terrible thing when we supported the idea of getting rid of Saddam Hussein. He was the only one who could control that country. It was the same [with the Taleban]. We move into countries and we have no idea of the culture. The Americans probably thought Bosnia was a town in Miami. There are people starving in Africa and we sit back and do nothing but we get involved in things we should leave alone.”

Mr Ecclestone, who plunged the Blair Government into a row about donations in 1997 after it emerged that he had given the party £1 million, has a reputation for being outspoken. Last month he said that Formula One needed a “black, Jewish woman who, if possible, wins some races”.

In 2008 he provoked uproar when he suggested racist comments directed at Lewis Hamilton on websites in the build-up to the Brazilian Grand Prix “started as just a joke”. However, he told The Times yesterday that he was deeply concerned when he saw fans “blacking up” to mock Hamilton, an act he described as racist.

All I can really say about Bernie is summed up by the following photograph: 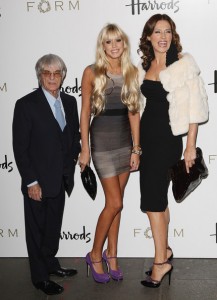