Nine local employees of the British embassy in Tehran were arrested in the turmoil after the Iranian election.

This can and probably should be read as a rude reminder of 1979, just one step short of the diplomatic worst. 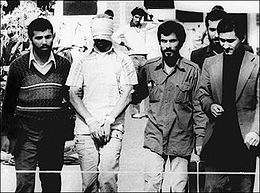 Seven of the employees have now been released and apparently another will be soon, but there has been no such luck for Hossein Rossam, according to this report:

A respected Iranian political analyst employed by the British embassy in Tehran is facing a lengthy prison sentence after he was charged yesterday with “acting against national security”.

The charge was a sharp escalation of the hardline Iranian regime’s campaign to blame Britain for instigating demonstrations against last month’s disputed re-election of President Mahmoud Ahmadinejad.

Seven have been released and another locally employed member of staff from the political section is expected to be freed soon. However, Rassam, 44, has been incarcerated at the notorious Evin prison.

This, from another report, shows how desperate the tyrants are:

Iran has seized on an item of routine travel advice from the Foreign Office’s website as evidence of the alleged political plot for which an employee of the British Embassy in Tehran is to face trial.
…
The Foreign Office said yesterday that the warning, issued in March, was simply part of its regular advice service to any British citizens who might be visiting Iran at the time. “It is a standard line that we issue as a routine travel precaution for any country where there is a possibility of political unrest around an election,” a spokesman said. “Similar advice was issued for Thailand and Lebanon, for example.”

But the head of Iran powerful Guardian’s Council, Ayatollah Ahmad Jannati, who revealed on Friday that Mr Rassam would face trial, has highlighted it as proof of a conspiracy.

“We discovered that even a website affiliated to the British Foreign Office had announced last March that public unrest and riots may erupt on the streets during the June elections in Iran,” he said. “It advised its nationals to be careful and not to appear in public places during that period… These [predictions] indicated their true intentions.”

The citing of such a flimsy pretext for Tehran’s case against Britain will add to fears that it is planning a “show trial” for Mr Rassam as part of its bid to prove that last month’s disturbances were orchestrated by foreign powers. Mr Rassam, a father-of-one who had previously worked in Iran as an independent political analyst, has been charged with the catch-all offence of “acting against national security” and is being held along with hundreds of other political detainees in Tehran’s notorious Evin Prison.

I am sure that presenters Lauren Booth, George Galloway, Andrew Gilligan, Matthew Richardson, and Yvonne Ridley are drafting their resignation letters to Press TV, the mouthpiece of the regime, right now.

We can count on them, perhaps opening their letters with “We are all Hossein Rassam”, can’t we.

UPDATE: Martin Bright has asked Ridley when she will resign from Press TV. She won’t. She’s, um, standing by the working class:

“What I find particularly upsetting is the inference that the working class and poor living in rural areas don’t really count — that their votes are inferior to the elite classes in north Tehran… maybe it’s ‘cos I’m a working class lass from Tyneside.”

I must say it’s the first time I’ve encountered Yvonne’s class consciousness. But there you have it: oppression is fine if the working classes voted for it (though quite how anyone would know that’s what they did is beyond me).

Anyway, at least Yvonne believes this nonsense. Andrew Gilligan has no such excuse. He’s on holiday at the moment and says he is “thinking about” his position.