Nadine Rosa-Rosso of Belgium describes herself as an “independent communist activist”.

Presumably one reason she is independent is that her foray in Belgian electoral politics in 2003 ended in miserable failure.

Her “Workers Party of Belgium” teamed up with fellow radicals, including Djab Abou Jahjah, a racist thug who has been denied entry to the UK.

Belgians decided they didn’t want her or her allies to have power over anything. Collectively the group won just 0.6% of the vote nationwide.

Oh well, never mind. Hamas is very exciting if you are an “independent communist activist”. These days she campaigns not for election, but for the terrorists.

Earlier this year, fired up by a “resistance” jamboree in Beirut (the communiqué is here, thanks John Wight, you big boy), she issued a call for Hamas to be taken off EU terrorist sanctions lists.

That too doesn’t appear to be going all that well:

Does the European Left, which you represent, support you in this endeavor?

I don’t represent the European Left. I’m an independent communist activist. The appeal was launched on the first of February, addressing, especially, all the MEPs in the Green Group, the European United Left, and the Socialist Group. To this day, with the notable exception of Giulietto Chiesa (Italy, Socialist Group, European Parliament), who immediately signed the appeal, we have not received any response from other members. However, very famous communists, such as Henri Alleg and José Saramago, have joined the appeal.

So try again in London. As reported here, she is scheduled to speak at a “Palestine & US Hegemony” event at Friends House on July 9th. Her fellow speakers will include a “Hezbollah representative” and Djab Abou Jahjah via video link from Lebanon, Azzam “Kaboom” Tamimi, and John Rees of the “Stop the War Coalition”.

There’s no stopping her, you know. She has seen the light from Gilad Atzmon:

For Gilad Atzmon it is this context that constitutes the real significance of the barrage of rockets by Hamas and the other Palestinian resistance organizations: “This week we all learned more about the ballistic capability of Hamas. Evidently, Hamas was rather restrained with Israel for a long while. It refrained from escalating the conflict to the whole of southern Israel. It occurred to me that the barrages of Qassams that have been landing sporadically on Sderot and Ashkelon were actually nothing but a message from the imprisoned Palestinians. First it was a message regarding stolen land, homes, fields and orchards: ‘Our beloved soil, we didn’t forget, we are still here fighting for you, sooner rather than later, we will come back, we will start again where we had stopped’. But it was also a clear message to the Israelis. ‘You out there, in Sderot, Beer Sheva, Ashkelon, Ashdod, Tel Aviv and Haifa, whether you realise it or not, you are actually living on our stolen land. You better start to pack because your time is running out, you have exhausted our patience. We, the Palestinian people, have nothing to lose anymore”. (Gilad Atzmon – Living on Borrowed Time in a Stolen Land)

What can be understood by an Israeli Jew, the European Left fails to understood, rather they find ’indefensible’ the necessity to take by force what has been stolen by force.

Got that? Bomb Tel Aviv until they leave!

Now some think it is fair to ask if people who are avid supporters of Hamas and fans of Gilad Atzmon are antisemitic. Well, don’t you try that one with this comrade. She has a pedigree, you see:

As communist I am part of a tradition which fought against fascism and Nazism. Communists protected Jews from the concentration camps, and many communists paid the ultimate sacrifice for this, many more than US soldiers in the war. Therefore nobody has the right to call us anti-Semitic. It is because our forefathers died defending Jews in the war that we now today stand with the Palestinian people and their resistance against Israel.

Rosa-Rosso is quite keen on violence in Europe too. She was encouraged by far left support for rioters in Athens earlier this year. So why don’t more people support the rioting youths in the French banlieues, she wonders? 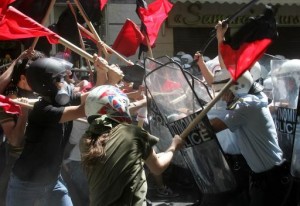 John Rees is on to another winner here, isn’t he.