I complete surveys every so often for YouGov Stone. I am on their ‘influential people’ panel “of over 3,000 opinion leaders drawn from the worlds of business, media, politics, academia, science and the arts”.

Last night there was a debate at the Reform Club for members of the ‘Stone Club’. This is the initiative of Carole stone. It’s a ‘networking’ Club for which one pays a subscription. However last night’s event was also open to the members of the panel.

It was a fairly amorphous topic – “Who calls the shots: business, politicians or the media?” but Nick Ferrari was one of the speakers and I wanted to congratulate him for terminating his PressTV show.

One of the first floor speakers was a blonde in the back row. Imagine my surprise when she gave her name: Michèle Renouf. 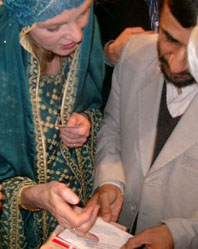 Both Andrew Neil (the Chair) and Nick had mentioned that Nick had finished with PressTV and she clearly felt this needed a response. First she said how wonderful Ahmadinejad’s speech in Geneva was. Then she said it was “bankers” who call the shots. Renouf has form of course and when she says ‘bankers’ … she is not talking Sir Fred Goodwin or Bob Diamond .…..
Renouf is so extreme that she has even been banned by the BNP

After the debate I asked her why, if Ahmadinejad’s speech was so great, most Western delegations had either walked out or not attended in the first place. “Because they are weak” came the answer. I then got a stream of Jew hate. Borobijan should be the Jewish homeland; Obama is hopeless because he is ‘Jew-ish’, so is Ban Ki Moon, so are all Western politicians; Countries are all in debt to ‘Jewish bankers like “Rothschild and Sieff’ ” (er .. he was the founder of M and S, not a banker, but since when do raging antisemites care about detail….), “there is a world Zionist conspiracy” (she really thinks that!), “there are Jews and there is Jew-ish”

The irony is that Renouf was apparently forced to resign her Reform Club membership some time after the David Irving trial (when she invited Irving as a guest!). So what was she doing there last night? Well the word on Pall Mall is that ahead of the event, there was quite a kerfuffle about her presence and that the powers-that-be at the Club were not at all happy, but that resignation may have been threatened. I hear she attends all the Stone Club events and that her presence has caused at least two people – far more important than me – to distance themselves (one Jewish, one not).

Well I do not think I want anything to do with people who think that Renouf belongs in polite society.

Carole Stone if you are reading this – thanks for last night, but please take me off your panel. When you are prepared to give Renouf her marching orders, let me know – and I will be delighted to come back.