Gene posted on Friday about the special English/Farsi version of We Shall Overcome that Joan Baez made for YouTube in support of Iranian democracy protesters. This reminded me how important music is as a motivational force – whether spreading ideas or just keeping people’s spirits up.

On this subject, there is a post on the Drowned In Sound blog about Iranian band Hypernova who moved to the US two years ago after Ahmadinejad’s government clamped down on “Western Music”.

Both these stories reminded me of an article I wrote for the HP Arts section last year, which I republish below. Music is banned to control people and to break their spirit, which is why tyrants pay special attention to it. 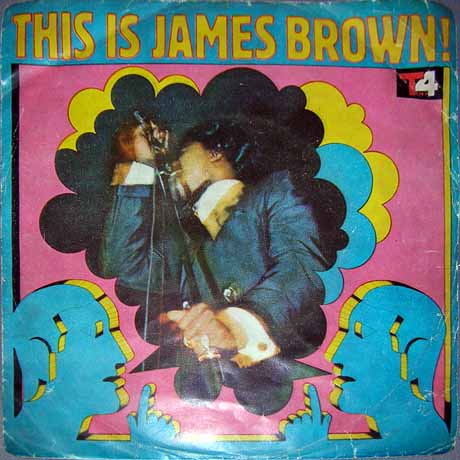 The photo above is of an extremely rare James Brown record. The record is rare not because it flopped – believe it or not hit records, mass produced in their millions, are not as rare or as valuable as ‘misses’ – but because the government of the country in which it was pressed, destroyed every copy they could find and tore down the factory that made it. But before I tell that story, indulge me while I ramble a little about my own peripheral experience of State repression of music.

In the late 1980s I was a student in Grahamstown, South Africa, when the Vöelvry Tour pulled into town. Now “vöelvry” is Afrikaans for “Free as a bird” and the tour featured two rock bands and a folk singer, part of the new “alternative” Afrikaans music movement. They were anti-racist, anti-apartheid, anti-conscription and anti-government. As such, they were seen as a great threat to The State. They were denounced from the establishment’s pulpits and podiums. More sinisterly, they were harassed not only by the police but the secret service who sabotaged tour vehicles and equipment and intimidated support staff, phoned in bomb-threats at venues and indulged in a range of ‘dirty tricks’ to cause as much disruption as possible.

The State, as powerful as it was, was able to restrict the bands’ airplay on State-owned broadcasting and to some extent, access to venues (like some university campuses). Using emergency regulations, they could ban certain references in lyrics too – like mention of Nelson Mandela, for example. Occasionally a record would be banned (from airplay). Eddy Grant’s “Give Me Hope, Johanna”, Pink Floyd’s “Another Brick In The Wall” and, oddly, Cliff Richard’s “Sing A Song Of Freedom” for example. My dad had a Joan Baez album (“Come From The Shadows”) with a sticker over the liner notes. It had been censored. But if you shone a bright torch into the sleeve you could just about read them. They said “If you don’t fight against evil, you become a part of it.“.

I bought some Billy Bragg LPs the other day. Interestingly they had a notice on the back saying they were not for sale in South Africa. Having listened to them, I’m puzzled to know why Billy thought his records might be enjoyed by racists, rather than the far-more-likely scenario of encouraging resistance. Wasn’t that his point, his message? Why ban your records from being sold in a country where resistance is most needed? I’m still bewildered. But I digress.

The point is, with all this repression of music, it did not enter my imagination that a State might – in the present time – be able to close down record shops, tear down factories, arrest dealers, ban artists, smash stereos and take everyone’s music away altogether.

The first inkling that this “1984” nightmare might be a reality somewhere on the planet came when I bought Frank Zappa’s “Joe’s Garage” around this same time.

Now Zappa famously took on Tipper Gore and her “Parents’ Music Resource Center” over proposals to censor music. Eerily Zappa had predicted elements of this future in Joe’s Garage, the sort of ‘rock opera’ which opens with the introduction of a character called “The Central Scrutinizer” who explains that his job is to enforce laws which will be passed in the future – including, eventually, the outlawing of music altogether.

Now of course, like any Zappa project, it flips between satire and sophomoric gross-out comedy as unpredictably as the quality of the guitar solos, but it is the liner notes that take us back to the James Brown record at the beginning of this post.

If the plot of the story seems just a little bit preposterous, and if the idea of The Central Scrutinizer enforcing laws that haven’t been passed yet makes you giggle, just be glad you don’t live in one of the cheerful little countries where, at this very moment, music is either severely restricted … or, as it is in Iran, totally illegal.

Totally illegal? It boggles the mind. Could it be true? Apparently so. How curious. And that’s where I left it.

Of course, I would return to issues around conditions in Iran years later, particularly with regard to Women’s and Gay Rights – and of course, in the last year everyone’s talking about Iran – but that curious bit of information on the back of a Zappa album was forgotten.

But it popped back into my head about a week back when I was poking around on eBay and stumbled upon an Iranian exile in Canada selling some records. His note said:

“All of the Iranian records were released in extremely limited numbers. Those releases are from end 50s until begin70s when the last King of Persia (Shah) ruled the country. After change of regime in Iran, the government closed all record companies and destroyed all available records on the market.”

Now I love records with a bit of history behind them, so I couldn’t resist bidding on a few, and ultimately buying the three featured here. I also had a very pleasant email exchange with the seller who told me a little bit more about the records and about what happened to the music after the theocratic mullahs took power.

Apparently, Iranian record companies made these records from the 50s until the fundamentalists took over in 1979. Their output was mainly local music (about 80%) and the other 20% was western. I am also told that Iranian companies even exported records for the Turkish market. Of course, Iran had been making recordings since the 1890s.

What I found quite interesting is that “western music” appeared to be a genre all on it’s own, with none of the categories that we naturally break it up into: blues, rock, folk, jazz, easy listening, etc… Take this compilation EP for example: 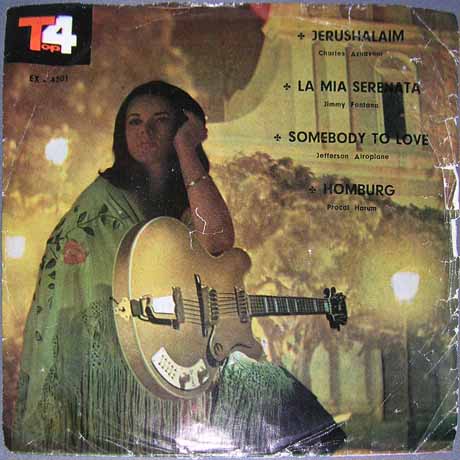 Apart for the beautiful cover art, what strikes one is the track listing by this Top4 label record: “Jerushalaim” by Charles Aznavour, “La Mia Serenata” by Jimmy Fontana, “Somebody to Love” by Jefferson Airplane, and “Homburg” by Procol Harem. That‘s quite a mixture!

Another label doing a similar thing was the Royal label: 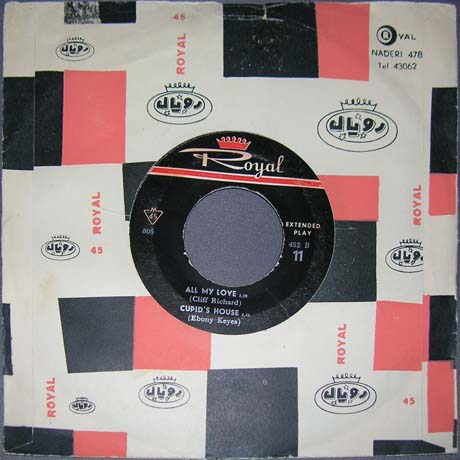 They followed the same formula, making me think that the market demanded a wide-ranging and varied diet of both western and locally producedpopular music. What is also notable is that the format seems to be 4-track 7-inch discs (known as EPs). The chief reason for EPs was that many people did not have the equipment to play 12” records, so the record companies often put out albums in instalments. These were also less of a cash outlay at one time. I wonder if the Iranian companies did so many EPs – well into the 70s – for similar reasons.

This Royal label EP had “I’m Coming Home” by Tom Jones and “This Town” by Nancy Sinatra (I’m pretty sure that’s a misprint of “Sugar Town”) on the A side and “All My Love” by Cliff Richard and “Cupid’s House” by Ebony Keyeson the B side. Perhaps not as radical a mix as Charles Aznavour and Jefferson Airplane!

My correspondent tells me that he left Iran shortly after the revolution bringing many of his records with him. “It was very difficult and dangerous to do that but I spent lots of money to manage that,” he tells me. Still, he had to leave part of his collection behind.

He has now decided, with some regrets, to sell parts of it. He explained why:

“My collection is a part music history in a very complicated country like Iran. There were not much people who appreciated that, that’s why you don’t have much collectors and these items are so rare. I decided to sell them to the westerns because they keep them safe, they know their values and they will be safe for ever. Just like lots of magnificent Persian or Egyptian antiques and precious things in western museums, if they were in native countries probably they had the same destiny as what the Iraqi and Afghan treasures had! I won’t live forever and if I die this little part of music history dies forever.”

One of the most vexing ironies is the fact that Iran’s mullahs used the relatively new cassette tape technology in the late 70s to foment their theocratic revolution. After the revolution, of course, cassette recorders were banned.

Still, thanks to the Internet and to Satellite receivers, rock ‘n’ roll is returning to Iran. The government is even having to sponsor a few state-sanctioned (and sanitised) acts, though “western music” is still officially banned – close monitored by the Ministry of Culture and Islamic Guidance, or, as Frank Zappa might have called it: “The Central Scrutinizer”.