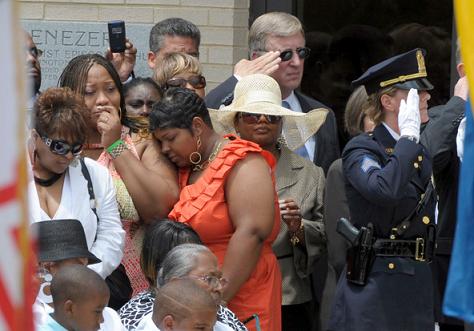 The slaying of U.S. Holocaust Memorial Museum guard Stephen T. Johns was the latest sign that discrimination and racism remain as potent as ever, ministers at the security officer’s funeral said yesterday.

About 2,000 mourners filled the pews of Ebenezer AME Church in Fort Washington to pay tribute to Johns, who was fatally wounded June 10. The guard had opened a museum door for white supremacist James W. von Brunn, 88, who then walked in with a rifle and shot him, authorities allege.
…..
Nesse Godin, 81, one of several Holocaust survivors at the service, said Johns and the other officers would greet her and other volunteers with a kiss on the cheek and a hug each morning when they arrived.

“He was a wonderful man,” she said.