Mir Hossein Mousavi, a former prime minister who waged a heated campaign against Ahmadinejad’s bid for reelection, urged his supporters to reject a “governance of lie and dictatorship.” He attributed the results to widespread vote fraud and vowed to resist a “dangerous manipulation” of the balloting.

Later, fighting broke out at Tehran’s Vanak Square among hundreds of Iranians who backed the rival candidates, Reuters news agency reported. Up to 2,000 Mousavi supporters sat down in the street, chanting: “Mousavi take back our vote! What happened to our vote?”

Police wielding batons then moved to disperse the protesters, the news agency said.

Iran’s Interior Ministry announced that Ahmadinejad had won 62.6 percent of the vote in the election. The ministry said Mousavi received less than 34 percent.

“I’m warning that I won’t surrender to this manipulation,” Mousavi said in a statement posted on his Web site Saturday. He said the announced results were “shaking the pillars of the Islamic Republic of Iran’s sacred system” and represented “treason to the votes of the people.” He warned that the public would not “respect those who take power through fraud.”

The question now is: how far are Mousavi and Ahmadinejad’s millions of opponents in Iran prepared to push this? Who are they willing to defy?

And please: no stupid comments about how the US or Israel will take advantage of the situation to launch an attack. That’s not in the cards now, and it disrespects the people of Iran, who ought to be our main concern.

Is anyone in touch with people in Iran who can provide more information, or have any informed ideas on what’s going on?

Don’t roll the credits yet; clearly there’s more to come.

Update: Or how about the possibility that media coverage of the election concentrated heavily on the urban middle-class opposition to Ahmadinejad and downplayed the support for him among the rural and urban poor and working class?

Update 2: Anger in the streets of Tehran.

(Via Andrew Sullivan, who’s doing a good job of tracking the post-election outrage in Iran.)

Update 3: Yoshie Furuhashi, who has a “thing” for Ahmadinejad, accepts the official election results without question at Seymour’s Place. In the comments at Socialist Unity, Eddie Truman calls it a victory for anti-imperialism.

Update 4: More video from the streets of Tehran, via the BBC.

Update 7: Reports of mass protests and 50-100 dead in the streets of Tehran.

Update 8: According to RFE/RL:

Khabaronline reports that [Hugo] Chavez called President Mahmud Ahmadinejad to congratulate him, saying that the president’s victory “belongs to all free nations.” 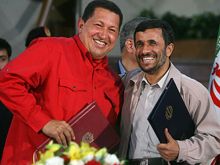