James W von Brunn, an 88-year-old white supremacist and Jew-hating Holocaust denier, entered the Holocaust Museum in Washington, DC, this afternoon and shot a guard with a rifle before being shot by return fire. Both have been hospitalized. The guard is in grave condition.

I’m sure von Brunn entered with the intention of shooting many more people. Who knows what was going on in his sick head?

If you have the stomach, you can find links to some of his writings here.

The guard, Stephen Tyrone [Johns], died at a local hospital after being shot with a rifle, officials said. The museum said it would be closed on Thursday in his honor. 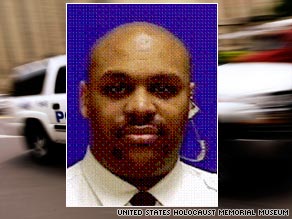