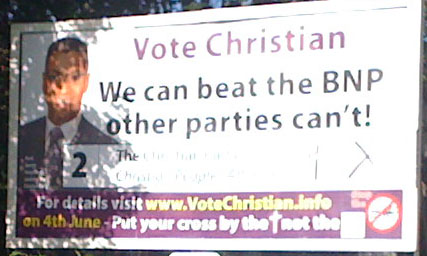 Who does ‘The Reverend’ George Hargreaves think he’s kidding?

His election billboards – thrown up in an area of South London with a high concentration of black evangelical/pentecostal churches – cynically exploit the fear of electoral gains for the BNP in order to get him into the Euro Parliament. The truth is a small sectarian party like his doesn’t have a hope in hell of “stopping the BNP”. Arguably, all he can ‘achieve’ is to dilute the vote of parties that can! But what he really hopes will happen that he will get a sufficient ‘proportion’ to secure a seat for himself. It’s quite a gamble, but the stakes are high – and they have nothing to do with the BNP. They have everything to do with giving fundamentalist Christians another foghorn in the EU.

But, if Hargreaves takes his Christian Party’s manifesto to Brussels – if you’re a woman, or gay, or a non-Christian… well, let’s just say on many of these issues it may as well be a seat occupied by a BNP thug.

The BNP’s manifesto contains these three promises (or threats, from my perspective):

Coincidentally, these points are echoed almost precisely by The Christian Party.

George Hargreaves was one of the leaders – wearing a preposterous orange jumpsuit – rallying the crowds of hate-mongers protesting outside Parliament last year when the government made it illegal for gay people to lose their jobs or be denied a room in a hotel because of their sexual orientation.

The Christian Party would use Hargreaves’s seat as a megaphone to attack human rights legislation that gave women control of their own bodies, single women their autonomy, and which protected lesbians and gay people from unfair discrimination. Non-Christians would be made to feel alien: the Christian Party’s manifest begins with a call for “A Christian Europe”. Isn’t that the BNP’s job half done?

If you’re a woman, a non-christian or gay, Hargreaves and his loons are the BNP. On issues such as these, The Christian party and the BNP speak the same language. Which is convenient for them since they’re on the same page, singing from the same hymn-sheet.

A recent ICM poll shows that after the three big parties, the Greens, UKIP, the SNP and Plaid Cymru all offer credible challenges to the BNP (who don’t seem to be doing very well at all – though we should never be complacent). Hargreaves and his fundies don’t even register – which makes his extravagant claim “We can beat the BNP, the other parties can’t” a big fat porkie!